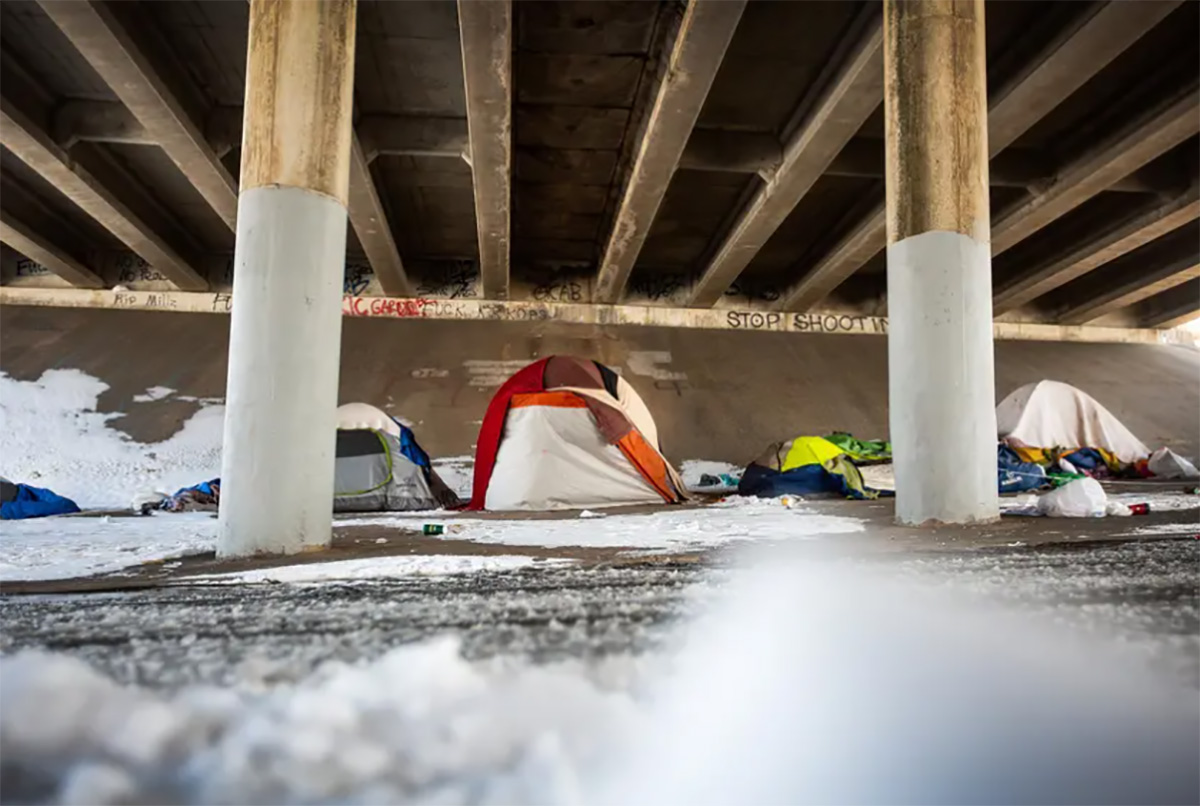 Legislation passed by the Texas House on Monday would prohibit homeless encampments throughout the state. Credit: Montinique Monroe for The Texas Tribune

This article was first published at Texastribune.org:

If the Legislation Is Approved and Signed by the Governor, Cities Could Lose State Grant Money for Failing to Enforce a New Statewide Encampment Ban

The Texas Legislature is considering bills that would ban homeless encampments statewide, almost two years after the city of Austin decided to lift a similar local ban — a move that critics say triggered the proliferation of tent cities throughout Austin.

If lawmakers approve the legislation and Gov. Greg Abbott signs it into law, it would become the latest instance of the Republican-led state government overruling local ordinances. State lawmakers also are trying to stop cities from decreasing police funding after the “defund the police” movement sparked by last year’s national protests against police brutality.

“We’ve seen a huge increase in not only the number of homeless living under bridges or on the streets, but also the rise in crime,” said state Rep. Giovanni Capriglione, R-Southlake, the author of House Bill 1925. “And really the difference has been that, at least in this case, this city has overturned their own ban.”

Austin’s City Council decided to lift the ban on public encampments in certain areas in July 2019, arguing that the policy had led to citations for people experiencing homelessness and hurting their ability to find housing. The move was quickly criticized by Abbott, who promised to take action against Austin and in his budget priority list asked the Legislature to withhold state grant money from cities that don’t ban such encampments.

The proposed bills — HB 1925 and its companion, Senate Bill 987 — would make camping in an unapproved public place a Class C misdemeanor, punishable by a fine of up to $500.

“We as a state act to make sure that our public spaces are safe and that our homeless population is taken care of. The situation has simply gotten out of control,” state Sen. Dawn Buckingham, R-Lakeway, said during a hearing for SB 987, which she authored.

The House bill was debated on the floor Monday, and Democrats attempted to amend the bill to decrease the penalties against people experiencing homelessness. After state Rep. Joe Deshotel, D-Beaumont, raised a point of order claiming a discrepancy in the bill’s witness list while in committee, it was sent back to the Urban Affairs Committee; it’s expected to receive a new hearing soon.

During Monday’s floor debate, some Democratic legislators criticized the bills, saying that they would criminalize people experiencing homelessness.

“What I’m concerned about is folks that can’t pay these fines and they are caught in the system and they get deeper and deeper in the hole,” state Rep. Barbara Gervin-Hawkins, D-San Antonio, said during debate on the House floor Monday. “[It’s a] fine that they can’t pay, we are setting people up for failure.”

“We should not criminalize those who can not afford a place to stay,” Crockett said. “What we’ve seen specifically here in the state of Texas is that minorities are criminalized at a lot higher rate.”

Although the visibility of homeless encampments has increased in Austin in recent years, both the Dallas and Houston areas have more people living in the streets, according to 2020 data. Some Austin residents have complained that allowing the encampments on public property — many are beneath overpasses or next to major roads — has created health and safety problems.

The city’s residents will be able to decide on the matter Saturday, after the group Save Austin Now managed to get more than 24,000 signatures to put a proposition on the ballot to reinstate the camping ban. Early voting began April 19 on Proposition B, which would reinstate not only the camping ban, but also penalties for panhandling, sitting and lying in public areas.

The Legislature could make that vote moot by imposing an encampment ban throughout Texas.

Save Austin Now’s co-founder, Cleo Petricek — a Democrat who has said the group has bipartisan support — said during the committee hearing on the Senate bill that she has heard many complaints about the encampments being safety and health risks, especially in Hispanic neighborhoods.

“It is these communities that have shouldered most of the destruction to their neighborhoods, parks, schools, playgrounds from unregulated homeless encampments, compared to rich parts of Austin,” Petricek told the committee members.

Austin Mayor Steve Adler has criticized both the city proposition and the Senate and House bills.

“All SB 987 does is impose possible jail and fines for those without homes. At best, it will force those without shelter to hide, and that’s even less safe,” Adler said in a written statement. “This bill, like Proposition B, offers no help and no solution. We can’t go back to the failed policies of the past that we know don’t work, like threatening jail and fines to make people move — when there’s nowhere for those people to move to.”

“Banning people from sleeping or sitting down in public won’t help them find housing; it’ll just further ostracize them from our community because they can’t afford rent,” Matthew Mollica, executive editor at Austin’s Ending Community Homelessness Coalition, said in his written statement to the Senate Committee on Local Government. “Evidence shows that, far from ending anyone’s homelessness, criminalizing basic human functions like sleeping increases the trauma associated with experiencing homelessness and makes it harder for someone to end their homelessness.”

‘It Ties Their Hands’

Homeless service providers in other Texas cities say they also are worried about how a state law banning encampments could play out. Regulations and enforcement related to camping in public places vary greatly among cities. Some, like Austin, don’t have a universal ban, but camping is not allowed in places like public parks. Others, like Dallas, don’t have a ban but will remove encampments if there are safety concerns.

In Houston, a city that has been touted as a national model for how to handle the homelessness crisis, tents and makeshift structures are banned, but the city does removals only when there is available housing for the people involved. Mike Nichols, CEO and president of the Coalition for the Homeless in that city, told lawmakers that he opposed the bills they’re considering.

“We’ve worked very hard to foster a good relation between the police and the homeless population. If the police are forced to do the enforcement and ticket people, that would totally undo what we’ve done,” Heitman said in an interview. “If the police are out there trying to get them to go to a shelter, they would be afraid that they would be taken to jail.”

Eric Samuels, president and CEO of the Texas Homeless Network, is also concerned about lawmakers’ threat to cut state funds to cities, even though the state’s contributions to homeless solutions are considerably smaller than what the federal government and many local governments provide.

“Any cut in that funding would be substantial, and it would really weaken our efforts to end homelessness,” Samuels said. “And if a community says that we’re not going to put a ban on camping in public, then I think we need to respect what that local community has decided.”

He called the proposed statewide encampment ban “the stick method — all it does is end up pushing people further in the shadows, pushing people behind the tree line, and that does not serve to get more people into services.”

Camping bans have led to court battles across the country. In February, the city of Boise, Idaho, had to commit $1.3 million for homelessness as part of a settlement in a decade-long case that six people experiencing homelessness filed against the city. The American Civil Liberties Union of Texas sued the city of Houston in 2017 for its encampment ban, but the lawsuit was withdrawn in 2019.

Nick Hudson, policy and advocacy strategist with the ACLU of Texas, said the group is “closely watching” what happens with the legislation.

“Criminalizing Texans who are trying to meet their basic needs is unconstitutional. Under the Eighth Amendment of the U.S. Constitution, it is cruel and unusual to punish someone for status they cannot control, such as experiencing homelessness,” Hudson said. “Courts have found that it is unconstitutional to criminalize someone for sleeping or camping outside when they have no place else to go.” 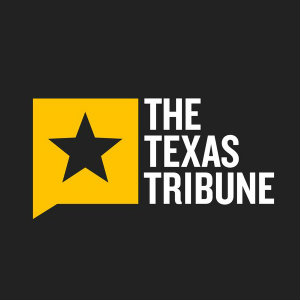 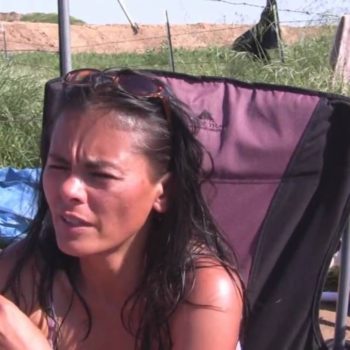