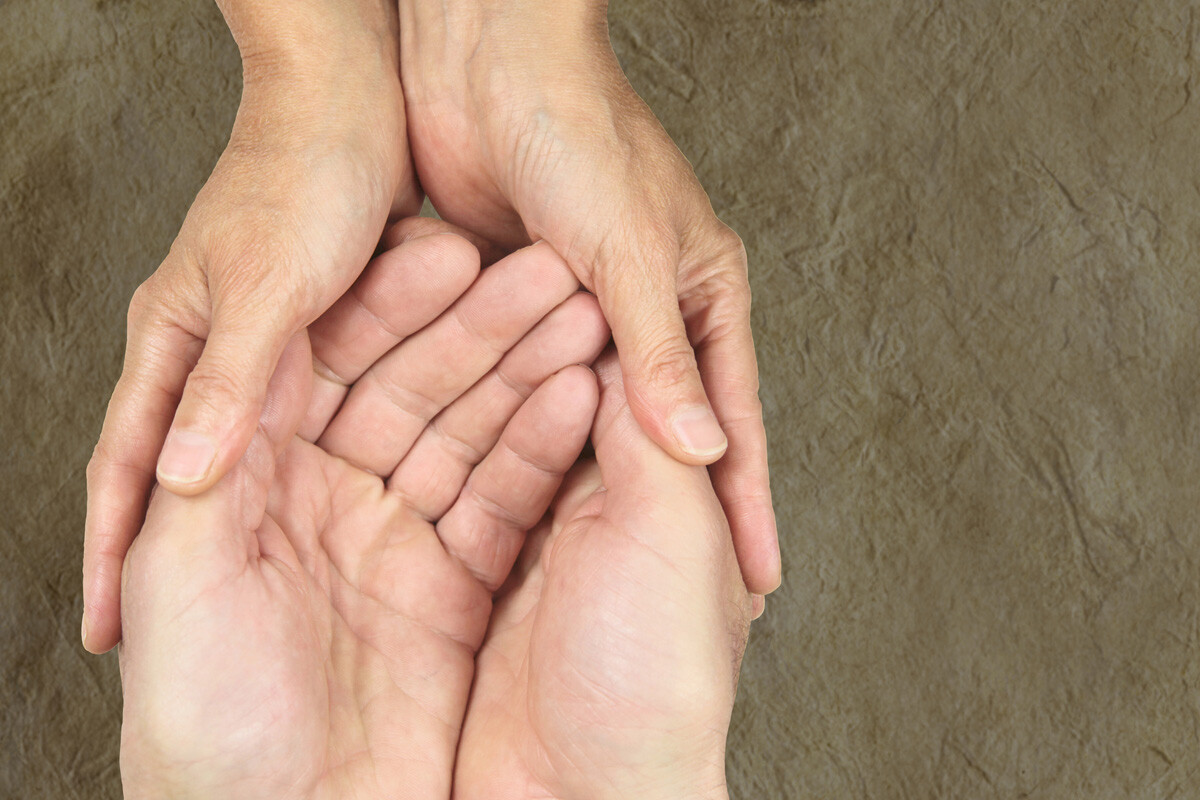 This month, I decided that it was important for my readers to hear something positive. My column is focused on bringing the realities of homelessness to readers who want to hear from actual homeless people about our lives and the daily hardship and suffering that we experience. However, it rarely focuses on the good.

Last month, my column was certainly timely. I predicted that 2021 would just be more of the same. I wrote it just around Christmas. The day after it was published, all hell broke loose both in the news and in my life. My van overheated and I limped it over to a local mechanic who informed me that the radiator was shot and I’d need to replace it!

Most of my friends in this area are dead now, so I am only left with two people who could have picked me up and brought me to the warehouse where I had my hobo tent. Neither was available. I sat for seven hours at the mechanic’s place. During that time, I heard a customer talking to somebody on the phone about a band of barbarians storming the US capital. I called it.

In the end, my van repair was $600! I just had a $600 repair for a different issue four months prior. Luckily, I had received a donation that saved the day. I never can put money aside to get back on my feet, though.

Now, hold on. I hear you thinking, “I thought this was going to be positive this month.”

Yes, and I am getting to that. You see, the morning my van broke down, I was going to the post office to check for a package sent to me for Christmas. It was from a very kind soul named Christy Killelea. Her group, Celebrate Recovery Life Group from New Orleans, hands out Blessing Bags to homeless people in their area. The package comes with a message that says, “You Matter”. She also managed to ship some by mail to myself and a few other homeless people.

According to Christy, the group meets on Sunday nights at a church called Celebration Church in Metairie. Her heart for homeless people gave her the inspiration for this project. The group raised about $300 and used the money to buy items like instant heat packs (aka Hot Hands), tissues, toiletries, gloves, mittens and other helpful items. Working from a small studio apartment, Christy packed these bags for male or female recipients (female bags had sanitary napkins and such).

Once packed, she drove around town with one of the men from her group distributing the bags to individuals who are homeless. She said they find them on the streets under highway overpasses and on sidewalks begging with signs. Sadly, homeless people are often too easy to find, yet go unseen by society (hence the name Invisible People).

Christy said one man was overjoyed and thanked her, stating the bag was “better than money.” I’m sure he never expected a gift bag for Christmas.

Depending on where people are located, they may not easily access stores to purchase things they need. Even if they have a few dollars to get them, transportation is often an issue.

Christy enjoys the reward of doing this project. She knows she is really helping people in crisis with a gesture that is both genuine and practical. After receiving the gift bag, I decided to spotlight the project in my column. My hope is it may inspire others to organize similar projects.

It doesn’t need to be Christmas since outreach of this kind is welcome always. Anyone can create a group to organize something similar using Facebook groups or meetup.com. You can even work with Girl Scout and Boy Scout groups, crafting clubs, spiritual groups of any faith. Basically any group willing to chip in and help make a difference in their community can offer direct outreach.

Christy’s example demonstrates that this is not only doable, but rewarding for both the giver and receiver. It’s a small but meaningful example that answers that often asked question:

“Yes, homelessness is a big problem, but what could somebody like me do about it?” 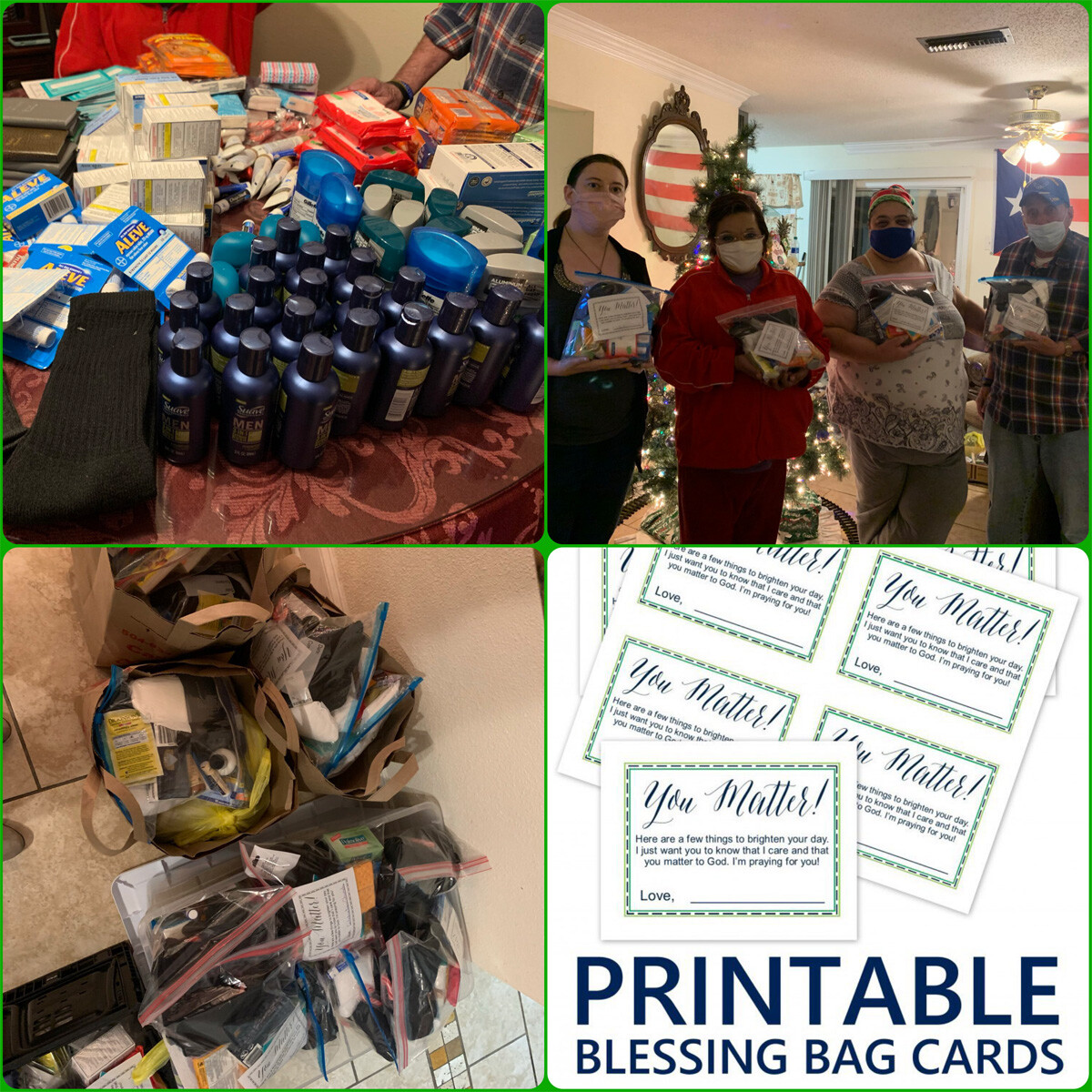 Maybe you can’t house anyone. Maybe you can’t donate a lot of money to the cause. But here is an example of what one group did in their community for around $300. I’d say that’s inspiring.

You see, in the bigger picture, what she did was make some Invisible People feel VISIBLE. She made them feel like somebody in this cruel world actually cares. Sometimes knowing that just one person cares is all you need to get through today. You don’t even have to be homeless to relate to that.

For those who don’t have much money themselves, partner with others to raise money to buy supplies. Perhaps you wouldn’t be in a position to organize or pack such bags, but contributing a few dollars to a group like this is a big help, too. Maybe you have no money to give. But you can volunteer time to pack the bags or shop for the items or drive the people doing outreach around. Even just posting about a project like this can help spread the word and increase donations. Posting is helping.

My life right now is in absolute chaos. But I do try to help anyone I can in any way possible but despite my limitations. I keep telling the universe that if I am allowed to get back on my feet, I would continue helping others as I have always done in the past (though I hope I am a bit smarter about not giving so much until I end up homeless for it).

I would certainly like to put together bags like this and help other people. It’s a great idea. A friend of mine in California asked me for a list of items I recommend for such bags. He wants to organize something similar and finds the idea of people helping people to be a really great way to make a difference.

In 2020, the catchphrase, “We’re in this together” was circulated all over from T-shirts to internet posts. It was supposed to comfort people regarding COVID. But I ask you to consider embracing this phrase all the time for all living beings.