Growing Up Blind: How We Learn not to See Homelessness 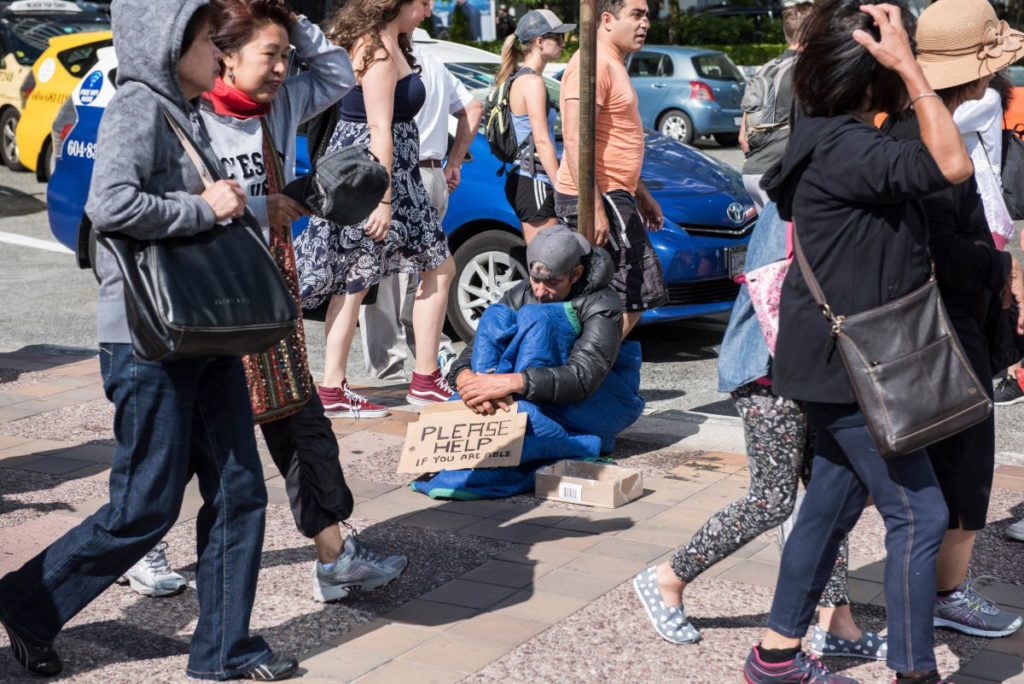 Thinking about poverty makes most Americans uncomfortable. But let’s dive a bit deeper. How do we learn not to see poverty or, more accurately, poor people? My theory is that at least part of it has to do with the connection in our heads between poverty and danger.

There’s a fundamental belief ingrained in most modern societies that poor people are more likely to be criminals. This makes sense, in a way, at least in societies that emphasize owning personal property. Why would rich people steal things they could just buy? When we think of an average case of theft, we usually aren’t talking about Bernie Madoff.

The irony, of course, is that Bernie Madoff stole a lot more than your average case of larceny. But he stole things that weren’t tangible, material goods. A retirement account or business investment isn’t something you can see or touch. Your laptop, car, cell phone, or television, however, is something you physically interact with and immediately notice if it goes missing. So all of us know what shoplifting, purse snatching, or pick-pocketing is.

Should They Be Punished?

Let’s dig a little deeper, though. Think about that classic morality and ethics question: If a starving person steals bread, should they be punished? The reason teachers use that example so much is that it’s effective. Many if not most of us don’t believe that people should be punished if they’re just trying to meet their basic survival needs. At least, we don’t think so when it’s a hypothetical situation.

In real life, however, two things are true. One: if caught, that starving person stealing bread would probably be put in handcuffs, a squad car, and a jail cell. In a lot of states they wouldn’t get out unless they could pay bail or a bondsman, lingering for up to eighteen months. (More on that later). Two: we are all raised to be suspicious, especially of people who are visibly poor.

This prejudice doesn’t stem from meanness. Instead, prejudices are built into society. They are structural. That means that even with the best of intentions, seeing all humans as full people involves fighting an ever-present legacy of ideas about fear and danger. And that legacy is really strong.

I’ll use myself as an example.

My parents were progressive, and they did a really good job of instilling compassion in my sisters and me (Thanks, Mom!). One of my earliest memories is of gathering toys to give to a woman at the bus station who was fleeing a violent household. My mom even regularly talked about structural prejudice from as long as I can remember.

My Daddy’s friend Eduardo was once at risk of homelessness. He moved into our garage. Eduardo was an Argentinian psychiatrist who couldn’t practice in the US, and so he shined shoes. He had 10 children back home in Argentina. In our suburban split-level, he tried to teach me to do yoga, play tennis, and eat carob instead of chocolate. He showed us how to smoke a wasp’s nest out of the mailbox. I didn’t think of Eduardo as either poor or dangerous, and certainly not as homeless. (I didn’t like carob and I definitely thought he was a weirdo, but I was seven and that was true.)

As I got older, my parents still performed wonderful and habitual acts of kindness. But they also, out of necessity, had to teach me “street smarts.” Commuting to school on public transport meant approaching the world with a certain level of caution. Whether directly or not, I learned lessons in avoidance. Don’t give your spending money to panhandlers. Don’t make eye contact with strangers. Keep a $20 bill in your shoe. Always have a plan if someone makes you “uncomfortable.”

Those aren’t bad things to learn, necessarily, except that discomfort and danger don’t particularly map onto one another. Nobody can go through life just trusting every single person they meet. But here’s the thing: I wouldn’t have been conditioned to avoid Bernie Madoff on the subway. I wasn’t taught to avoid relatives, statistically the most likely people to do me harm. That’s not what “criminals” looked like in my imagination.

On crime shows, serial killers are often drifters, murderers are drug dealers, and street criminals are drug addicts. Rapists are strangers, and poor neighborhoods are high crime areas where one can be easily targeted. None of this is really true.

Instead, poor people are more likely to be victims of both violent and property crimes than richer people. This is true regardless of where they live, the color of their skin, or any other factor. When it comes to homelessness, more fatal crimes are committed against homeless people than all other bias-related crimes combined.

There is, in fact, only one way that homeless people are more likely to be criminals. Many areas have criminalized sleeping outside. But that’s ridiculous, and sleeping outside certainly doesn’t put me in danger. Homelessness is just not that phantom menace.

Once we realize that, we have a much better chance of seeing homeless people we come across the way I saw Eduardo. They have stories, and people who they love, and histories of how they got to where they sleep. They might be weird in a different way than you and I are, but they’re also just people. And somehow, often, they also have hope, something we all could use a little more of.

Nell Curran is a writer, scholar and educator. She has a Ph.D. in cultural anthropology. Her work explores the experiences of people living through and recovering from poverty, homelessness, incarceration, trauma and neglect, and the policies and programs that impact them.