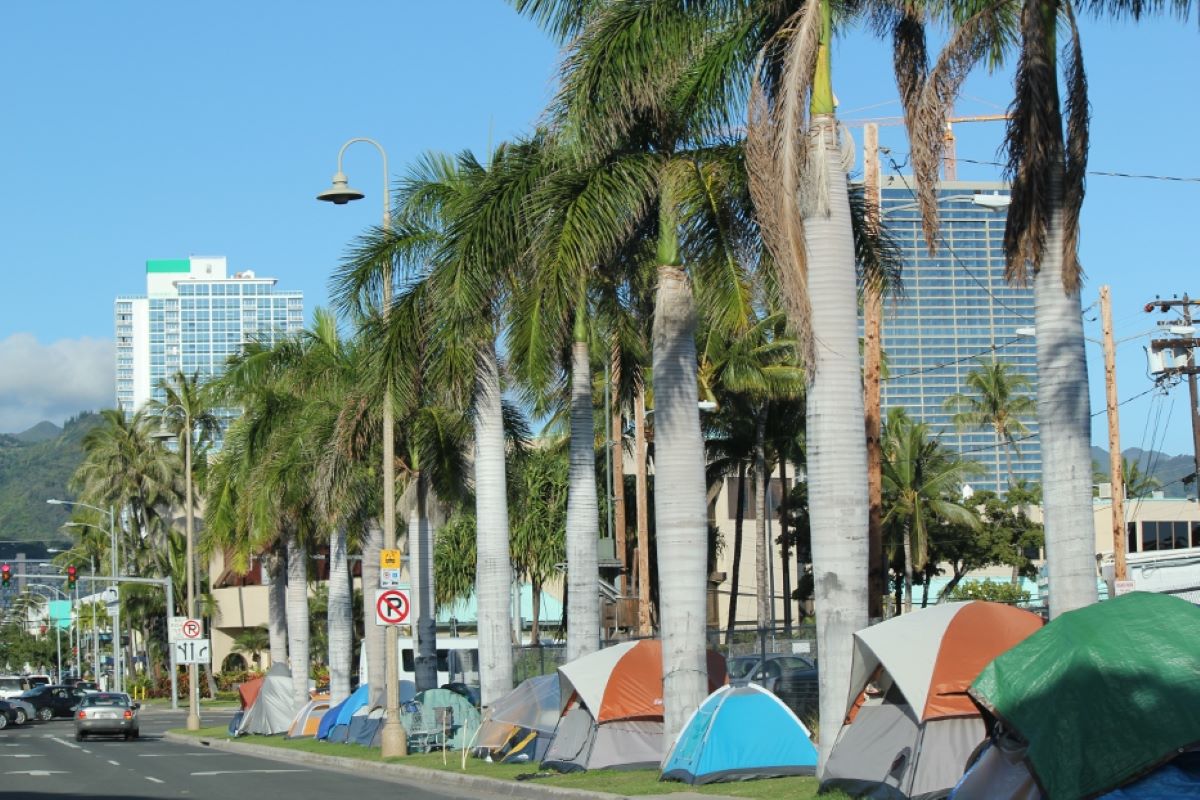 The idyllic islands are not a paradise for everyone

If you’ve ever been to Hawaii, you probably had a great time enjoying the natural beauty, the unique culture and the amenities of your hotel.

What you probably wouldn’t have seen, unless you deliberately sought it out, was the state’s homeless population.

For them, island life is no vacation. And, depending on where they’re located, their treatment is drastically different.

Each Hawaiian island seems to have its own approach to dealing with its homeless inhabitants. Some are more effective (and humane) than others.

Let’s take a good look at Hawaii’s homeless people, where they come from and how they’re treated.

The state of Hawaii has one of the nation’s highest per capita rates of homelessness.

If you’re not surprised by that statistic, you are probably familiar with the idea that mainland states routinely fly homeless people to Hawaii on one-way plane tickets.

Honestly, it’s unclear whether this is actually happening, or how much. But that’s not to say the idea is absurd.

In fact, we know that similar controversial “homeless relocation programs” have been going on for decades.

Some cities will provide their homeless residents a one-way bus ticket to a destination of their choice, just to get them out of their city limits.

It’s just that the logistical cost of flying someone to Hawaii versus putting them on a bus to Indianapolis is much greater, and therefore much less likely to happen. But there have been instances of these programs flying people to foreign countries, some even as far-flung as New Zealand. So, it’s not outside the realm of possibility.

Most of these transplants, however, come during better times, seeking a fresh start, or looking for work. Many have jobs lined up that later fall through. Some even have savings in the bank when they arrive – but no one is immune to homelessness. And with Hawaii’s high cost of living, you may not know how much you’ll need until you arrive. By then, it’s too late.

Now that we’ve covered who Hawaii’s homeless residents are, let’s take a look at how they’re being treated.

We’ll start with the good news. Maui has actually adopted a new method of police-homeless interaction modeled on a successful Seattle program.

The program, called Law Enforcement Assisted Diversion, or LEAD, involves proactively building a rapport with homeless people on the island. Police are established as allies rather than enemies.

To accomplish this, police officers receive special training. They are then deployed with mental health professionals and social workers to assist in providing resources to homeless people who need them.

The teams work with the homeless community to divert low-level offenders away from jail and into services or voluntary treatment where applicable.

Breaking the cycle of distrust between police officers and homeless people who may have had bad interactions with law enforcement in the past is a slow process, but worthwhile. When there is trust between these two groups, outcomes improve for everyone.

This program has been adopted in 33 states so far and is seeing good results in Maui.

On the island that also houses the state’s capital, Honolulu, the situation is not as sunny.

Police routinely break down encampments, arresting everyone they find.

And in the last five years, nearly 400 homeless people have died on Oahu’s streets. 90 of those deaths occurred just last year, so that rate may be quickening.

The top three causes for these deaths were substance abuse, suicide and homicide.

One can’t help but wonder if those numbers could have been reduced if these people were connected with the appropriate resources and treatment options before their afflictions became fatal. A better relationship with police can also help protect homeless people from becoming victims of violent crimes.

Having a system like LEAD in place on Oahu could have saved lives.

Kauai is only just coming to terms with its homelessness crisis as the number of unsheltered people on the island has recently doubled.

What was once a problem limited to the Garden Isle’s signature natural places is now front and center in towns and cities. The historic flooding in April 2018 had a pronounced effect, forcing people from their damaged homes onto the streets.

With much more public attention on the issue, Kauai officials are on the receiving end of a lot of pressure to “do something” about the rising levels of homelessness on the island.

They are faced with a difficult choice. Which example will they choose to follow? Maui’s compassionate policing model, or Oahu’s draconian response?

For now, the future seems hopeful. Oahu’s Governor, David Ige, has announced plans to build the island’s first ohana zone. On other Hawaiian Islands, ohana zones have sometimes been little more than tent cities set up in a designated place. But Governor Ige has more in-depth plans for Kauai’s ohana zone.

He wants to set this one up with a mixture of temporary and permanent housing, as well as on-site access to necessary support services.

This housing-first approach Kauai is adopting is encouraging to see. Hopefully it will serve as a model to other islands that are lagging behind in compassionate and effective homelessness response.

However they came to find themselves homeless in the beautiful island state, Hawaii’s unhoused population is often subjected to the disdain of the locals and the disregard of tourists.

How they are treated by authorities, as well as their ability to access services, is largely dependent on which island they end up on.

Still, there’s hope for the future. As Hawaii’s housing-first and compassionate policing programs deliver results, they may become more widely adopted throughout the state. Oahu’s leadership is bound to discover, sooner or later, that breaking down tent cities doesn’t just make the homeless people living in them disappear.