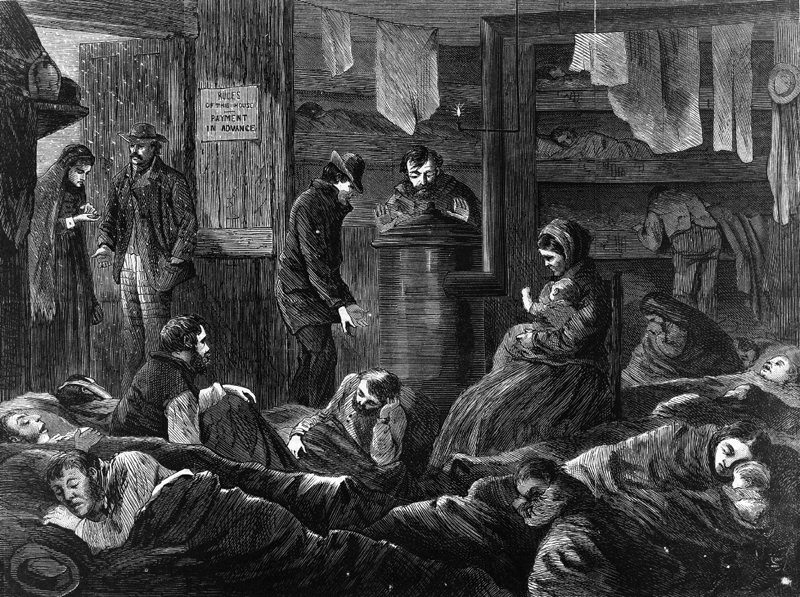 Homelessness in America is not a recent phenomenon. There is a history of homelessness throughout U.S. history.

During colonial times, English poor laws and Elizabethan attitudes about “worthy” and “unworthy” governed how communities responded to those in need and those without homes.

In 1730, New York established its first almshouse. Poor houses and almshouses began opening across the colonies—many with rules and work requirements. During the Industrial Revolution and the transition to new manufacturing processes, there was mass movement to cities. This caused a new urban poverty that often resulted in homelessness, panhandling, and run-ins with the police.

Economic downturns in the 1830’s and 1850’s caused many to lose their jobs and homes. By the 1830’s, tens of thousands of homeless people lived in police stations by night and in the streets by day. In the 1850’s, youth homelessness emerged when adolescent boys left home to look for work and ease the financial burden on their families. Many ended up homeless.

People moving west during the Gold Rush and veterans of the Civil War became more mobile thanks to the expansion of train travel. But, there were not enough jobs to go around. They survived scavenging food and clothes. The terms “bum,” “tramp,” and “hobo” emerged. During this time, homelessness was not just an issue in cities like Boston and New York on the East Coast. Homeless people were found in small towns in the Midwest and places in San Francisco.

From 1900 through the Great Depression, homelessness persisted. During this time, the rise of municipal lodging houses and an ongoing need for shelter and services was documented. In 1927, the Mississippi River flooded from the Midwest to the Gulf of Mexico and displaced millions. The natural disaster left more than 30,000 African Americans in Mississippi, Louisiana, and Arkansas homeless. Ultimately, it contributed to mass migration of African Americans to large cities.

Before the Great Depression, local philanthropic groups served meals, built shelters, and offered classes and job training. They often perpetuated the notion of “deserving” and “undeserving,” made judgments, and blamed people for their poverty. Faith-based organizations also began to open in poor parts of large cities. They provided shelter and a meal in exchange for a sermon and some hymns. During these years, tensions rose among the faith-based organizations, philanthropic groups, and publicly funded programs regarding the best way to address homelessness.

Historians have clearly documented homelessness during the Great Depression. This event sparked the first large-scale federal response to homelessness: the Federal Transient Service (FTS). At its peak in 1934, the FTS was serving over 400,000 people annually through shelters, job training, meals, medical and dental care, and arts programs. In 1935, after significantly reducing homelessness and equipping people with new skills and opportunities, the program was dismantled.

As the Depression ended and World War II began, most of the country went back to work. Homelessness was focused in skid row (impoverished) areas of cities. In the mid-1960’s, as “urban renewal” was sweeping across the country, municipalities destroyed many skid rows to make way for highways, government buildings, and new neighborhoods.

In the 1970’s through the 1990’s, more people became homeless. Officials cut federal funding for housing. State mental hospitals were de-institutionalized. Single-room occupancy housing decreased. And many veterans returning from the Vietnam and Persian Gulf wars as well as the Iraq and Afghanistan conflicts became homeless. As a result, the U.S. Interagency Council on Homelessness (part of the federal government executive branch) formed in 1987.

Many states—at the encouragement of the federal government—developed and worked to implement plans to end homelessness during the 2000’s. Officials developed the Housing First approach to homelessness in the 1990’s; the program gained steam in the 2000’s after research demonstrated its effectiveness for some populations. Another model, the Vulnerability Index, prioritizes people who have been homeless for at least 6 months and have one or more specific health conditions for housing.

During the Great Recession of 2007-2009, many people defaulted on their mortgages due to economic conditions and the real estate market. As a result, there was a big increase in foreclosures, evictions, and unemployment, which led to increased homelessness.

In 2010, the U.S. Interagency Council on Homelessness developed Opening Doors, the first comprehensive federal strategic plan to prevent and end homelessness. Officials updated the plan in 2012, 2015, and 2018. The result has been progress toward reducing homelessness.

At the same time that the federal plan has focused awareness on homelessness and mobilized action, many communities around the country have implemented laws that criminalize homelessness. In the late 2010’s, awareness of the disproportionate number of people of color among those who are homeless has been spreading. Some communities are beginning to develop and test racially equitable solutions. And in 2020, the COVID-19 pandemic is affecting people in many ways that increase chances of becoming homeless or staying homeless longer.

Read more about the history of homelessness. 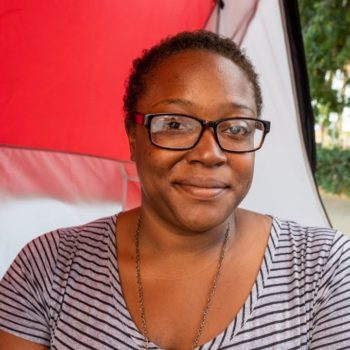 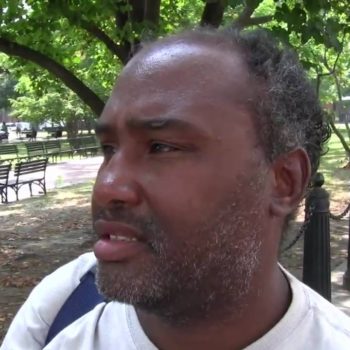