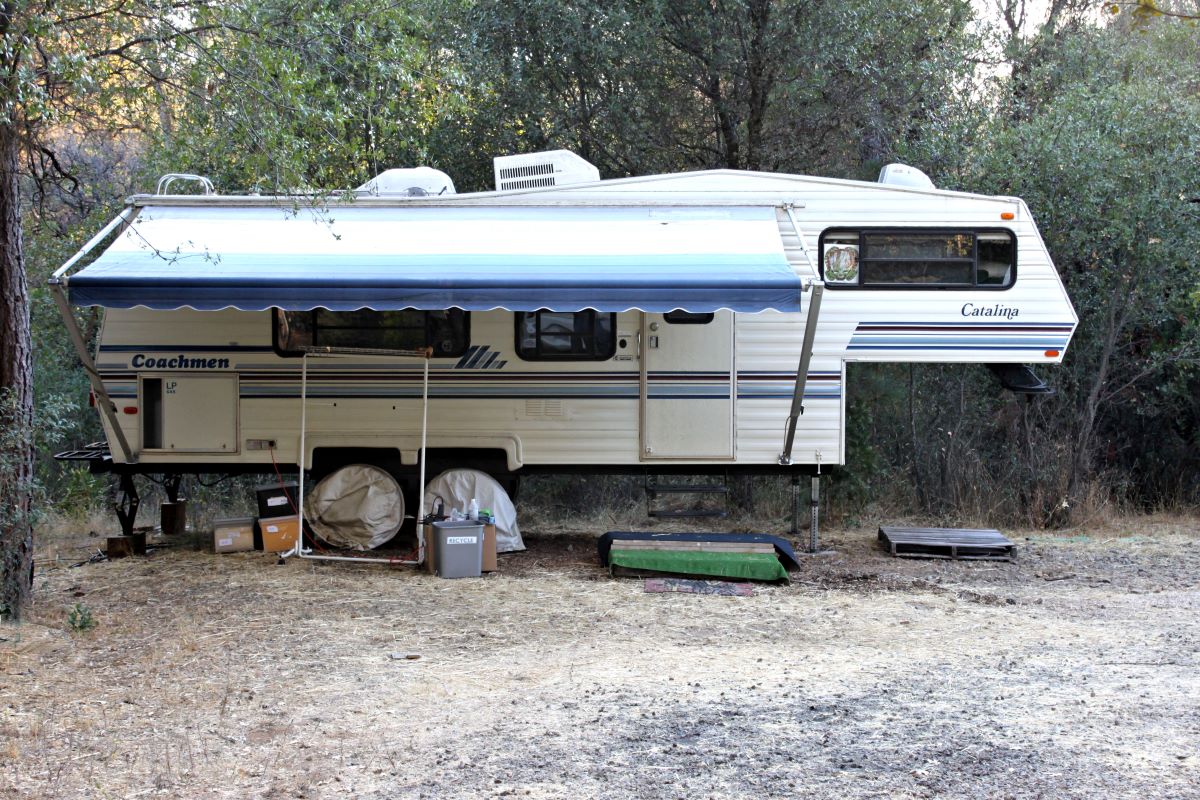 As crazy as it might sound, sometimes homelessness is the best alternative. I’ve rented rooms in disgustingly filthy homes with severely dysfunctional people. I’ve had roommates who were gun-wielding drug dealers. And I’ve lived with emotionally violent and abusive women.

In all fairness, I’ve lived with some pretty wonderful people too, but I do all right alone. I’m a serious introvert.

Barring a financial twist of fate (it could happen), living below the county radar in this trailer seems to be my best option. The closest thing to legal affordable housing is a waiting list.

Last summer, I experienced a series of what some people might call miracles. But, I would rather credit the people responsible for my good fortune than attribute it to God or karma.

Duncan and Laura have given me an idyllic place to stay for as long as I want. Alice, Della, their husbands and people from my “village” made it possible for me to own, free and clear, the trailer I now live in.

If it weren’t for the fact that it’s illegal to live in a trailer outside of a trailer park, I wouldn’t even be technically homeless. The only thing I have to fear is getting found and evicted by the county. That, and wildfire.

In 1969, I dropped acid and decided I’d rather be a writer than a child psychologist.

Exactly nobody thought that was a good idea. However, if I hadn’t made that occupationally risky decision, you wouldn’t be reading this now.

In 2018, without the aid of a drug, I experienced a profound mind-altering event. It was like a long-overdue switch finally flipped in my head. I realized I had the power to be happy if I just surrendered to an unconditional attitude of gratitude.

Although it had been building for years, the precipitating event was when Della handed me a simple piece of paper. On it were the names of a dozen people who had pledged a total of $1,515 to help me buy a trailer so I wouldn’t be homeless.

I did not see that coming. I had not asked Della to do that nor did I expect her to do that. Hell, it never even occurred to me she would do such a thing.

Of course, she would. She’s that kind of woman.

I already had a plan to buy the $3,400 trailer. I had $2K, and I knew I could finance the balance with a cash advance from one of my credit cards – at 27 percent interest. While I have good credit, at my income level it was a calculated financial risk.

When Della worked her magic (she’s very good at asking people for money), the switch in my brain tripped.

Except for Alice and Dennis’ generous $1K gift, the donations were all from OSCX volunteers. They came from close colleagues and from volunteers I’d only met once.

It wasn’t just that Della had, on her own initiative, collected more than enough money for me to buy the trailer without going into debt. I was also deeply affected by the generosity of the people who gave anywhere from $15 to $500 (Della).

I felt equally grateful to each, regardless of how much they gave. What touched my soul was that they cared enough to give. To me.

It was a virtual group hug that squeezed the cynicism and despair out of me.

I could feel it deep in my soul. I had changed.

Duncan had a lot to do with it, too. He had offered me safe ground. Even when I was still in the little trailer, I felt secure. And when he invited me to stay, I knew I had found sanctuary.

It took Roger a month to make the repairs, including some he said he couldn’t make. I think Lydia insisted.

Finally, the day came in August. I gave Roger $3,400 in cash, and he signed over the pink slip. He’d already told me his truck engine couldn’t handle the tow.

Therefore, I hired a guy named Len I found on the Nevada County Peeps Facebook page, the social media mainline of the county.

It was an easy 11-mile drive – except for the last two-tenths of a mile. I told him he’d have to haul the 25-foot trailer up a rough and narrow dirt road to near the top of the hill. Then he had to precisely back it in at a 90-degree angle without hitting a tree or Duncan’s large pontoon boat.

Monday morning, Len and I met at Roger’s house.

Len and Roger knew what they were doing, so I let them do it. Soon the rig was hooked up and ready to hit the road. I shook Roger’s hand, leaped into my car and set off so Len could follow me.

Happy to see Len and my trailer in my rearview mirror all the way to the property, I parked far out of the way so Len and Duncan would have room to back in the 30-year old Coachmen 250RB (rear bathroom) into its destination.
They did it in one take. While they were unhitching and stabilizing the trailer, I helped by staying out of the way. Duncan hooked up my electricity and water while I was paying Len for a job well done.

Duncan spent the next couple of hours checking me out on the amenities and challenges of living in a real trailer. We discussed remodeling ideas. I needed an office, not a living room. He told me how to do it.

As we finished going over things, Duncan was ready to go home to Laura and their luxury, two-room yurt. It was out of sight a couple dozen yards farther up the hill.

Duncan put out his hand and looked me directly in the eyes. As we shook hands, he said, “Welcome home.”

Click to read part one, part two, part three and part four in this series.

Tom Durkin is an award-winning freelance writer and photographer. He has two degrees with honors from UCLA. He has been episodically homeless since 1979. At age 40, he was diagnosed as bipolar with three personality disorders, childhood PTSD and ADHD. "Well, that explained a lot," he laughs. Presently, at 71, he lives illegally and happily below the radar in a trailer on some friends' wildland property in the Sierra Nevada Foothills.