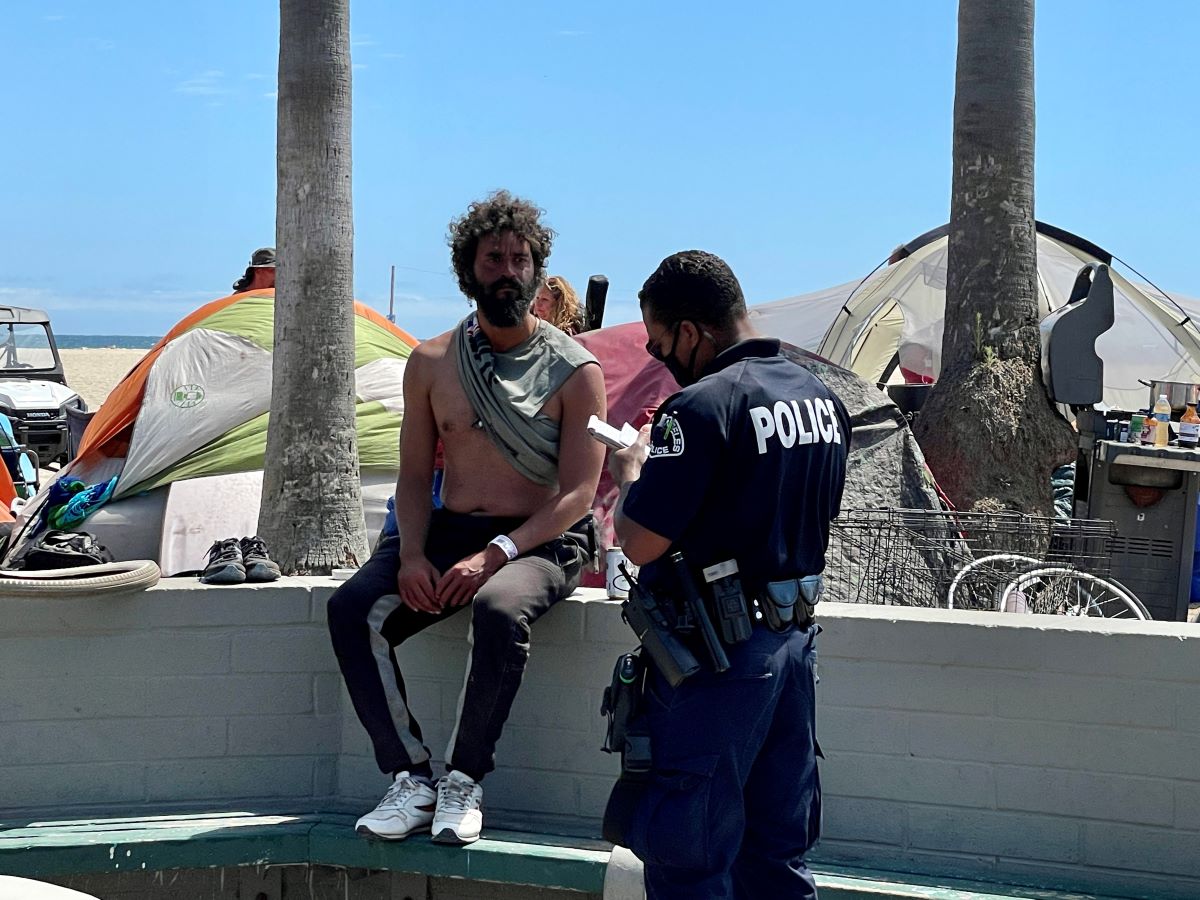 Advocates are calling for more outreach programs after city crews cleaned up the remnants of a homeless encampment along the Venice boardwalk over the weekend.

Some say a program initiated by Councilman Mike Bonin, who represents Venice, and the St. Joseph Center has helped homelessness on the Venice Beach Boardwalk reach a critical turning point. However, other efforts to enforce greater Los Angeles’ quality of life ordinances threaten the progress made to provide permanent shelter and supportive services.

In response to the cleanup operation conducted by the Los Angeles Police Department, several grassroots organizations told the Los Angeles Daily Times that local leaders need to stop promoting policies that have failed “time and again.”

“[Increased criminalization] causes harm to people already dealing with crisis, trauma, and the extreme lack of affordable housing across our region,” the group said in a statement.

According to a report by KCRW, nearly one-third of the formerly 200-person camp has been placed in housing since the program began on June 28. The six-week program is scheduled to conclude at the end of August. Other nonprofits supporting the program include People Assisting the Homeless, Safe Place for Youth, Venice Family Clinic, and Self Help and Recovery Exchange (SHARE!).

In an interview with KCRW, St. Joseph Center President and CEO Va Lecia Adams Kellum said the group is hopeful that their strategies will be adopted by others who perform similar work. Kellum added that people she has contacted were understandably hesitant to enter the program because so many other options had not yet worked for them.

“But ultimately, we believe that most everyone will be receptive and open to housing. Because we’re not only offering short-term stays in a motel or shelter — we’re also connecting people with permanent housing … to stay and get stabilized,” Kellum told the news station.

Kellum said her organization is also using ambassadors to conduct peer outreach. Ambassadors are people who recently accepted housing or services, so it allows their peers to interact with someone who found success through the program, she said.

“We believe that folks like that can really speak to the hearts of the unhoused neighbors who are still grappling with whether they should just give up or stay where they are, or give life one more chance,” Kellum added.

At the same time, advocates are concerned that Los Angeles officials are increasing the criminalization of homelessness.

For example, LA’s City Council approved new measures to increase enforcement of the city’s urban camping ban. The measures include heightened restrictions on sitting, eating, and lying down in public spaces. Council is scheduled to take a final vote on the measures at the end of the month.

At the same time, Councilmember Mark Ridley-Thomas has proposed requiring the city to create a “street engagement strategy” to help connect people with permanent shelter and services. The plan also requires city agencies to conduct outreach efforts before additional restrictions of homeless people from public spaces can proceed.

However, some outreach organizations such as Ktown For All say the plan is rife with holes. The organization argues that people forced to leave an area will lose access to resources they left behind.

There’s a fundamental flaw in this plan that no one seems to be addressing: what happens to the next person who camps in a spot that’s been previously cleared and restricted? Will we permanently prioritize scarce resources for that area? Will these protocols apply? https://t.co/IIDihHpmlg

“Newly restricted spaces will either become exclusion zones enforced by police or else become de facto access centers on an ongoing basis, where people can move in with the knowledge they’ll receive resources they wouldn’t in other places,” the organization shared on Twitter.

“This strategy, like all criminalization efforts, is based on the wishful thinking that our insufficient number of shelter beds, housing units, and treatment beds will somehow grow if only we give the police more power to punish unhoused people,” Ktown For All added.

According to a report by KTLA, the number of people experiencing homelessness in Venice before the pandemic began was increasing dramatically. In 2020, it increased by 57 percent compared to the citywide increase of just 16.1 percent.

When the eviction moratorium expires, more people will be forced into homelessness across the country including Venice Beach. Given the current direction officials are embracing, it seems criminalization will continue to worsen as homelessness continues to increase. Authorities and NIMBY residents continue to push negative propaganda to increase support for police action rather than support for housing, which is a proven solution to homelessness.

We must act now. Contact your legislators today and tell them you are against criminalizing homelessness. Instead, you want to see investment in affordable housing to get our vulnerable neighbors off the streets.