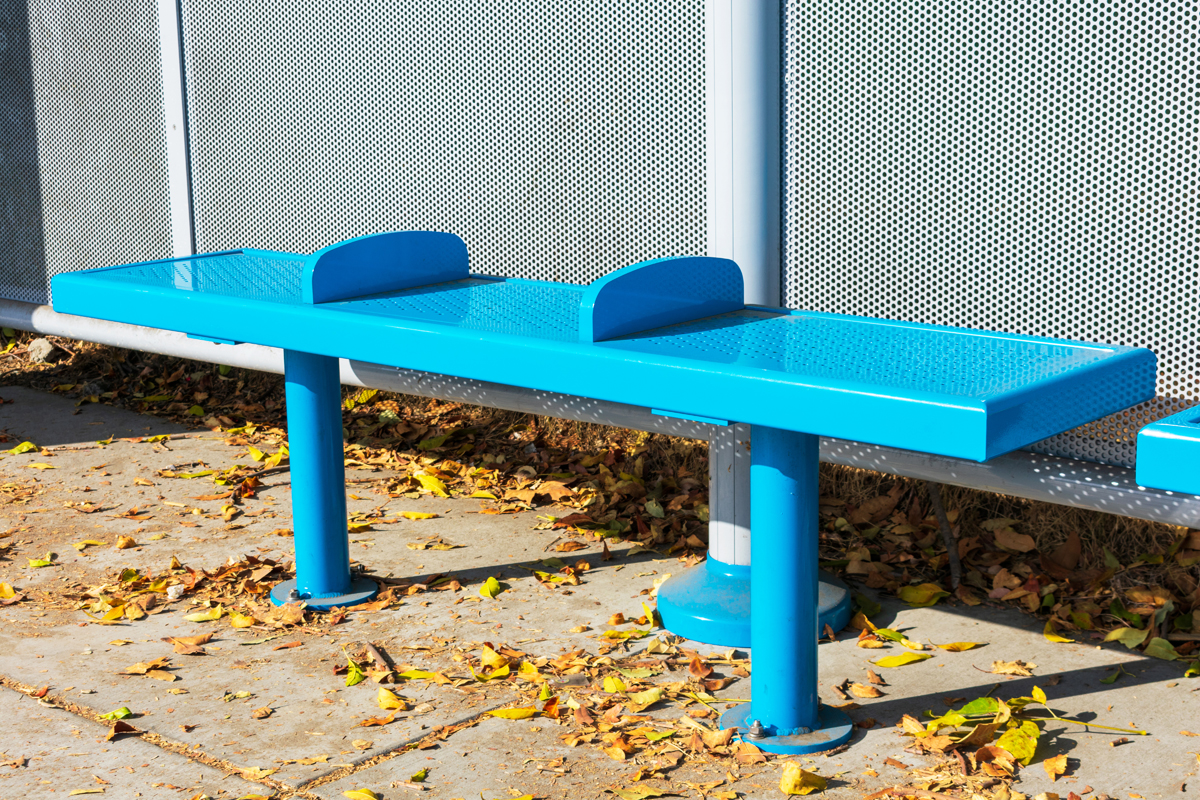 Seemingly innocent, this bench is an example of hostile architecture as the dividers prevent a person from lying down on the bench.

While the idea of architecture in public places manipulating specific groups of people’s behaviors isn’t new, it’s often hidden. It affects everyday lives – for example homeless people who use a park bench to sleep on at night.

While the average person won’t notice the hostile architecture, it’s hard to miss once pointed out.

In recent years, more and more people are documenting and criticizing hostile architecture. It screams to certain people that they aren’t wanted in the community. It is also cruel, forbidding the opportunity to sleep from people who have nowhere to go.

What Is Hostile Architecture?

Also known as anti-homeless architecture, hostile architecture is supposedly used to help maintain order and prevent crime. Most famously, anti-homeless spikes are built into the ground to prevent homeless people from lying there. These spikes are usually placed in areas where shops and offices are, and designed to prevent the awkward conversation of asking a homeless person to move.

Councils and designers believe hostile architecture helps keep spaces safe for the public because it discourages anti-social behavior. However, they wrongly associate anti-social behavior with homelessness. While these designs can affect anyone, they most often affect the lives of homeless people. Take a bench with armrest in the middle, for example. While seemingly harmless, it is designed to prevent a person from lying down on the bench.

Sociologist Robert Park raises the legitimate question of what type of collective self-conception leads people to design cities covered in vicious-looking metal spikes and illuminating blue lights to prevent vulnerable homeless people from having space to sleep. He argues that it must be people who are paranoid, anxious, and hostile themselves.

What Are Some Examples of Hostile Architecture?

Famously, New York City’s Strand Bookstore installed sprinklers to spray people hoping to sleep under it. In Portland, huge concrete planters were set under the bridges along Southwest Naito Parkway. This is an area with little foot traffic, but it was previously used by homeless people to retreat to when it was raining.

Additionally, a 7-Eleven store in Portland blared an unpleasant-sounding high-pitch alarm outside the store to “keep homeless people away”, according to the clerk working there. The store has since ceased the audio when they were informed this practice might violate the city code.

Next time you wander around a city, look at the architecture around you. You may notice slanted benches at train stations and bus stops that are uncomfortable to sit on. In most cases, they’ve been designed this way to prevent homeless people from sleeping on them.

Benches have always been one of the most sufficient options for homeless people to sleep on in a busy city. Because of this, many cities have made them as uncomfortable as possible to sit on while still serving their original purpose.

While windows and walls have been spiked in cities to deter birds for a long time now, many windowsills at ground level are spiked, too. This time, the spikes aren’t for the birds. They’re to prevent people from sitting or sheltering under the awnings of the windows.

As mentioned, some areas have spikes installed into the pavement as a very obvious measure to prevent homeless people from sleeping there. Made from concrete or metal, these aggressive-looking spikes are often installed near doorways, bridges, and other sheltered areas.

Likewise, if you spot a smooth area of pavement abruptly transforming into coarse or jagged rocks, it’s probably there to prevent people from sleeping or begging in that area, as it would be so uncomfortable to sit or lie on. This form of hostile architecture is often found under awnings or other shelters.

There’s also the argument that instead of protecting the public from homelessness, homeless people must be protected from us. Homeless people are often the targets of both verbal and physical abuse, and unlike most people, cannot retreat to a safe place to stay.

Hostile architecture often drives homeless people away, forcing them to sleep in less populated areas. As a consequence, they are at more risk of assault.

Forcing homeless people to find other places to sleep won’t solve the issues of homelessness. It simply relocates it. If homeless people have no place other than benches to sleep on, then there’s a more significant issue. Rather than developing ways to prevent people from sleeping in public spaces, cities must find a safer alternative for these community members.

Architecture isn’t the cure of homelessness. The main issue is that cities want to discourage homelessness without offering a practical solution. If cities were able to place homeless people and vulnerable people into safe accommodation, there would be no need for hostile architecture.

Homeless people have a right to use public spaces, too. They should feel welcome in using public spaces in the same way that all citizens do. They should also have the chance to do so from the position of being housed rather than dependent on finding a park bench or office doorway to sleep across.