How Are Homeless People Advocating for Themselves in this Time of Crisis? 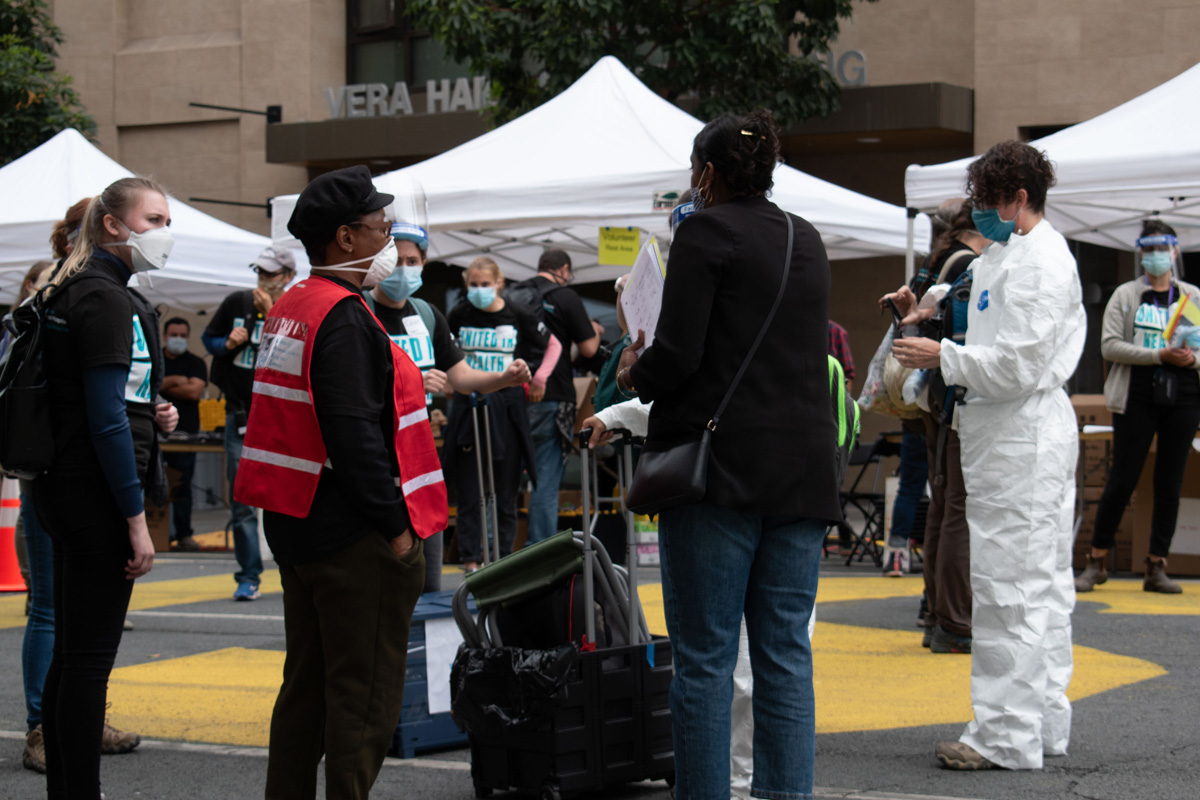 “Any public health response that does not center the voices of people who have lived the experience of homelessness is going to come up with the wrong solution.”

Imagine waking up on a rickety shelter bed situated in the center of an open floor plan building. You are among 340 residents who sleep two feet apart without knowing each other. In the building, there is just one row of bathrooms for you and the others to share.

You feel alone, abandoned, and afraid. It’s not just because you’re homeless in a shelter where humans are being treated like numbers. It’s because the people around you are suddenly dying from a virus you’ve never heard of.

It starts as a cough or fever. Soon it progresses into something worse.

At first, you think it’s just a common cold. As a member of the homeless community, you’re already significantly more likely to die from curable ailments. It’s due to exposure to harsh conditions, physical, mental or otherwise. Your predicament has you cut off from the world for the most part. So it is only after the death toll really racks up that you hear about the Coronavirus pandemic and the havoc it is wreaking on the world.

This is the very dystopian reality many homeless people woke up to in early 2020. A national emergency was declared and members of the homeless population, perhaps the most vulnerable to fatality, were the last to catch word of the event.

Advocates blame a combination of components like lack of access to PPE, resources, and global health info for the lapse in communication. Whatever the reason, by the time it was determined that homeless shelters were hotbeds for virus transmission, the damage was already done.

Our unhoused brothers and sisters may live without the warmth of physical walls surrounding them, protecting them from harsh winters and sweltering summers. But when it comes to social isolation there’s no denying the invisible walls dividing them from the general public.

This truth has never been clearer than it was in the wake of COVID-19, as people in authority scrambled to figure out ways to reduce the spread within this vulnerable population. What they eventually learned is that the only way to communicate clearly with homeless people is to go through their brethren – i.e. other individuals who are also experiencing homelessness.

Homelessness is a traumatic experience for multiple reasons. One of those is social targeting/isolation. When people are arrested for merely existing in public spaces, when they are viciously attacked in the shadows, when they are ignored to the point of vanishing, distrust in the system is a natural consequence.

The UCSF Center for Vulnerable Populations recognized this fact. It created a task force comprised of fellow homeless individuals for outreach purposes. This seemingly small change made a huge difference in reducing the spread and increasing testing availability.

“We do all of our work in partnership, not only with community-based organizations, which are absolutely essential, but most importantly with the community itself,” said Dr. Margot Kushel, who serves as the director of this organization.

Through This Model of Inclusivity, the Benioff Initiative Was Created

The UCSF Benioff Homelessness and Housing Initiative aims to end homelessness by producing research-driven solutions. And, with the help of homeless people themselves, it has also played a pivotal role in COVID testing.

Through this program, we learned that, much like everyone else in the world, homeless people in the USA had legitimate questions and concerns regarding the testing and the novel Coronavirus. Some chief concerns included:

Health professionals also quickly learned that mobile testing sites were ultimately more effective for COVID testing among this vulnerable population. Without the help of people who are part of this vulnerable community, this vital information could not have been uncovered.

This story and others like it show the efficacy of hiring homeless and formerly homeless people for outreach work. The fact that we continue not to do this only proves that we are, at least on some level, feeding into the narrative that homeless people lack redeeming or admirable qualities.

In reality, the opposite is true. Homeless and formerly homeless people exhibit a type of compassion that can only be gained by living through the horrors of being unhoused. This unique personality trait would be an asset to any company. But it is particularly beneficial in fields like social work and advocacy.

Here we learn, yet again, that homeless people are neither lazy nor are they helpless. When called upon to provide aid, they are often the first people to lend a hand. Won’t you do the same?

Talk to your representatives about hiring homeless and formerly homeless people for positions that are centered on ending or reducing homelessness.