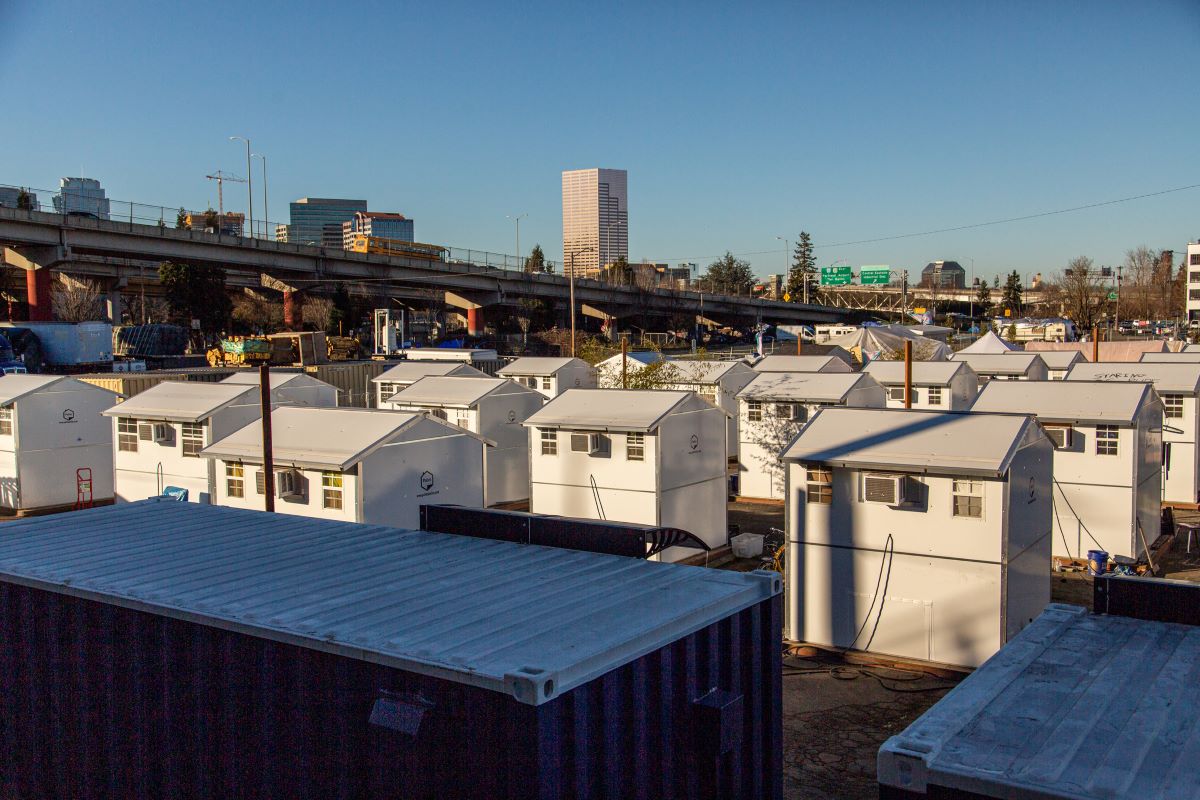 Their Expensive Shoeboxes for Homeless People Are Popping Up All Over, With No Accompanying Boom in Permanent Housing Options in Sight

Pallet, the Washington-based, for-profit manufacturer of the glorified tool sheds we’ve written about before, has seen a 7,000% growth in demand for its amenity-light temporary housing product. Cities up and down the West Coast and throughout the country are turning to them for solutions that offer more safety and stability than a tent on the sidewalk.

The problem is that these cramped huts offer only a small step up from that in terms of quality of life. That minimal improvement comes with an eyewatering price tag. Cities end up blowing their budgets on next to nothing when they could invest just a little more to have safe, affordable, permanent housing options.

How Much Could a 64-Square-Foot Shack Cost?

But that’s not all! There is also a $25,133,900 annual cost to operate these sites. Now we’re talking about a $3,345 ongoing monthly cost for a one-room shelter made out of plastic.

The average rental price for a Los Angeles apartment more than ten times the size is only $2,661. And most of those come with such luxuries as a private bathroom, kitchen, and maybe even a washing machine to boot. The city of LA is not getting its money’s worth out of these Pallet villages.

What Does That Money Buy?

Not very much. Pallet’s tiny shelters include 2 to 4 twin-sized beds, a few shelves, a locking door, and locking windows. Optional features include electric hookups to power the two outlets, extra insulation for cold climates, interior lighting, and a heater and air conditioner. Light, heat, and electricity are optional features.

The units are also independently inspected by local Fire Marshalls wherever they end up being installed, and Pallet is quick to point this out because more than one of their villages has caught fire in the past.

Bathroom, kitchen, laundry and common area facilities must be bought separately. A fully assembled, non-ADA compliant bathroom unit from Pallet with two toilets, sinks, and showers will cost you about $35,000. You can also get a big, empty 400 or 800-square-foot unit for just under $37,000 to fill with whatever you want.

How Much Does All of This Help?

Undeniably, access to Pallet shelters and other options like them can positively affect the lives of individuals. But very few people get to see that benefit. Ultimately, temporary housing initiatives like this are a short-term band-aid when we really need a long-term fix.

While conditions in these tiny plastic sheds may be an improvement for some unhoused people, they are still not suitable enough for comfortable habitation. This is justified as being a short-term, low-cost solution for people transitioning to permanent housing. But we’ve seen how “low-cost” it is, and it hasn’t proven to be very short-term either. Temporary shelter is designed to support a person over a short window of time as they transition into permanent affordable housing. The problem comes when there is no permanent affordable housing for them to transition into.

That’s the reality for most people using temporary housing options these days. Rather than passing through a temporary program and out of homelessness, the system is backed up. There’s nowhere for these people to move to. They either stay in “temporary housing” indefinitely or eventually find themselves back out on the streets.

Isn’t It Better Than Nothing, Though?

Technically, building these expensive and minimal temporary housing options is better than nothing. If doing nothing is the alternative. But at the same time, that money could have gone towards other projects that would make a much bigger bang for your buck. Take a look at the numbers again.

For just the annual operating costs, the city could have rented out 787 average apartments for a year and still saved $48 million. Instead, they got 626 plastic shacks with barely enough room for two people to put their shoes on at the same time.

Don’t get me wrong- having a private space off the street with easy access to facilities and services is a great thing for people currently living without access to any of those things. But we can do better than this.

However, it may not actually be better than nothing in this specific case.

Many local activists think that LA is in a rush to build all of these temporary tiny villages so that it’ll once again be allowed to legally enforce its laws against homelessness.

A federal court ruling has prevented the City of Los Angeles from ticketing or arresting unhoused people just for camping in public unless there is shelter available to them. The mad dash to build shelter, any shelter is all in an effort to reach a point where they can accommodate 60% of the city’s homeless population, at which point they believe they’ll be allowed to start criminalizing homelessness again.

Seen with this additional context, it’s easy to understand why these housing options aren’t beneficial. They’re not meant to be helpful to the unhoused people they ostensibly serve. They’re meant to be helpful to the local businesses and NIMBY residents who depend on police action to remove poor people from their sight. And the amount of money they’re willing to spend on that proves what we already knew- that their objections were never really about finances in the first place.