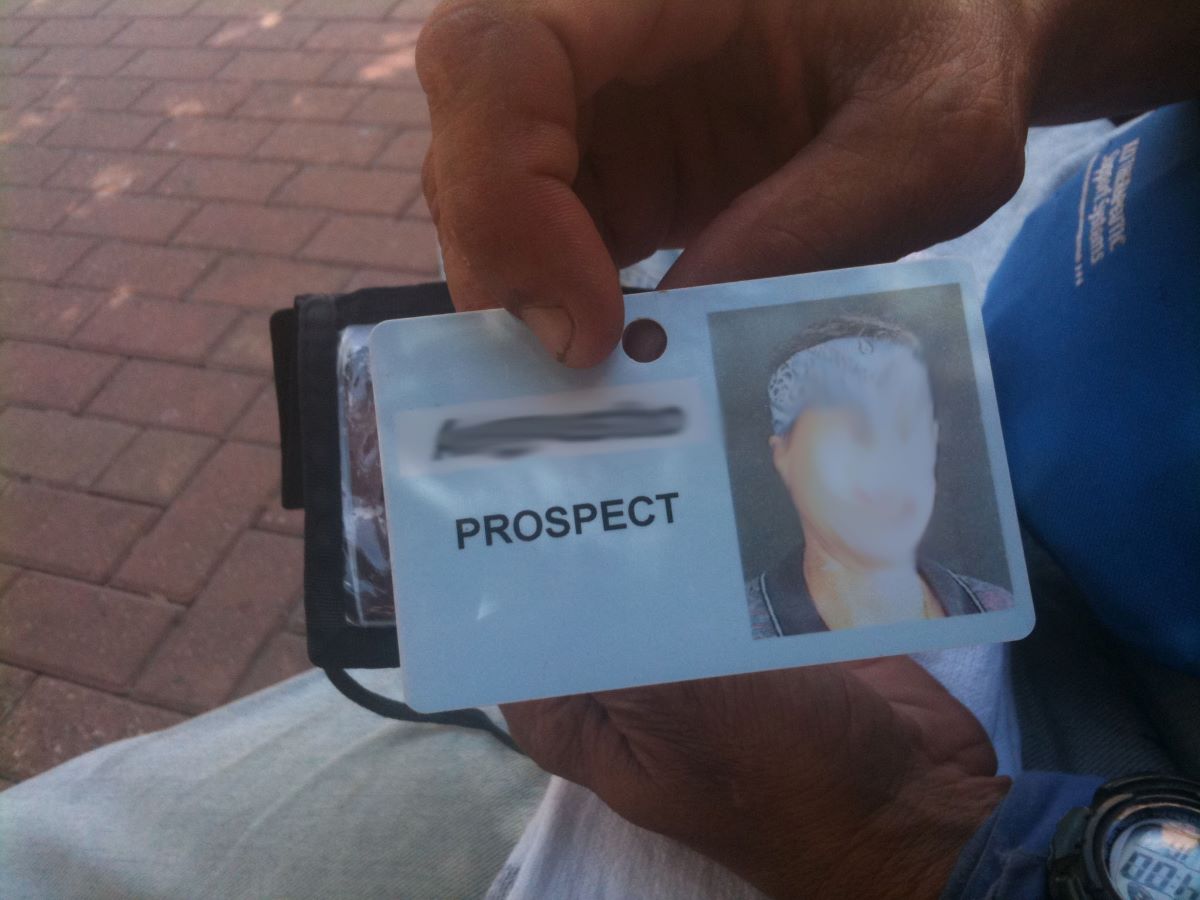 A San Antonio homeless man shows his prospect card to sleep in the courtyard at Haven For Hope, founded by Robert Marbut.

In the wake of increased criminalization against the homeless population, in a nation where more than 1.4 million people will endure a homeless shelter stay and hundreds of thousands more will sleep unsheltered each year, troubling news has once again come to light.

Recently, Invisible People published a piece on the implications of President Trump’s new haunting proposal regarding homelessness. In it, we suggested that the current President of the United States was making a push toward harsher punitive responses to the homeless population and that the undertone of his “homeless reduction” campaign seemed to lean heavily on forcing homeless people into concentration camps, much like the ones that currently exist at the US/Mexico border. Needless to say, the piece was met with a medley of support, skepticism, and indifference.

However, as of December 4, 2019, even more evidence that the president is indeed moving in this direction has surfaced. As per the president’s request, a man who makes a six-figure salary creating prison-like “campuses” and passing them off as shelters for the homeless population could become the executive director of the United States Interagency Council on Homelessness (USICH).

Who Is Robert Marbut, the Man Who Wields the ‘Velvet Hammer’?

Robert Marbut wears many hats, ranging from politician to CEO. He is most known for wielding what he calls a “velvet hammer”. Presumably, this figurative hammer is a weapon designed to hit the homeless population in the head – literally.

His work as a traveling consultant for the homeless community is largely centered on admonishing cities for what he calls “coddling” homeless people by doing things like giving them food and not arresting them for sleeping in public. His views are quite reflective of the growing NIMBY hate groups who feign concern for homeless people but then mock and refuse to help them.

The core of his teachings comes from his “seven guiding principles”, a list of guidelines so utterly abhorrent it has been deleted from the internet. Some of the highlights from the principles he spent years promoting, but now wishes to cover up include:

For readers unfamiliar with the inner-workings of the USICH, this organization is responsible for:

As per the criteria above, it’s clear that this position is ill-fitting for a man who harbors any sort of hatred for our neighbors without walls. Yet, Robert Marbut, the six-figure earning, traveling consultant who believes shelter is not a right but something that needs to be earned, is known for saying things like:

His research is controversial mainly because statistical data seems to largely negate his findings. Like other NIMBYs, he denies holding any malice toward the homeless community. However, his actions show the face behind his mask.

In addition to not-so-subtly nudging law officials into enforcing anti-homeless ordinances and attempting to make shelter admission mandatory for homeless people, Robert Marbut’s homeless shelters are called “transformational campuses”. They can’t be referred to as homeless shelters because entry doesn’t equate to shelter.

Robert Marbut has a reputation for building controversial “campuses” that resemble jail. One was even built inside of an old prison. He is the founding president and CEO of Haven for Hope, which labels people as “prospects” and “members”. Here, homeless people are treated even worse than convicted criminals. “Prospects” are left outside to sleep on the cement until they are deemed worthy to come inside becoming “members”. Even after entry, they may continue sleeping on the ground to earn a bed.

Implementing such harsh consequences because an individual happens to be homeless goes against the compassion Robert Marbut claims to possess. That said, it coincides rather nicely with President Trump’s new plan to force homeless people into concentration camps. While his plan can be called by other names, it still wreaks of corporate greed and injustice.

Robert Marbut’s Shadowy Connection to Organizations that Cause Mass Displacement

It is said that if you want to control a people, you must inflict upon them a disease and then sell them the cure. The fact that Robert Marbut serves as president and CEO of several U.S. Olympics divisions has not escaped the attention of Invisible People, nor should it escape yours.

Need we remind you that the Olympic Games is responsible for the mass displacement of more than two million people and counting? It is also notorious for criminalizing residents and forcing citizens it views as “undesirable” out of town, or at least out of the sight of international viewers. Here we see a system based on relocation, criminalization, and mass displacement.

Why would we let that same system infiltrate the homeless sector?

With December 10 mere days away, prolific figures in the homeless sector are already expressing a great deal of concern about putting Robert Marbut in a homeless leadership position.

The National Law Center on Homelessness & Poverty stated the following in an urgent press release:

“We are concerned, however, that Doherty’s forced resignation and that Marbut’s appointment is related to recent White House rhetoric that dehumanizes and degrades people experiencing homelessness and that calls for ‘sweeps’ of homeless encampments. Marbut has previously worked as a private consultant whose work with cities has been grounded in a so-called ‘velvet hammer’ approach that forces homeless persons into ‘campuses’ (including one housed in a former jail) under threat of arrest.”

How many Trump appointees have been reported to the UN Committee Against Torture? You wouldn’t think one dealing with #homelessness would be, but here we go… #HousingNotHandcuffs https://t.co/7k8nzVG6Pr via @vice

Important: Lack of Affordable Housing is the Leading Cause of Homeless. Incidentally, it’s the Only Cause that Robert Marbut Refuses to Address

The easiest, most efficient solution to homelessness is giving people homes. Statistical evidence supporting this fact is astronomical. Yet, for all of his tactics and strategies, Robert Marbut never addresses the housing crisis.

His so-called solution – which is most often transitional housing (and the harshest possible version of it) is merely a Band-Aid. In some of his documents, he does admit that there are variances in resolving the homeless crisis. But there is one thing all homeless people have in common: the need for a house to live in. Not a mattress in a jail cell, not a space in an abandoned courtyard, not their name on an internet list, but an actual, physical home.

Talk to your legislators right away and let them know you’re paying attention. Tell them you see through Robert Marbut and all of the smoke and mirrors politicians who think they can trick you into believing homelessness has ended if they make homeless people disappear into concentration camps. Tell them you expect real change in the form of housing as a human right for all.