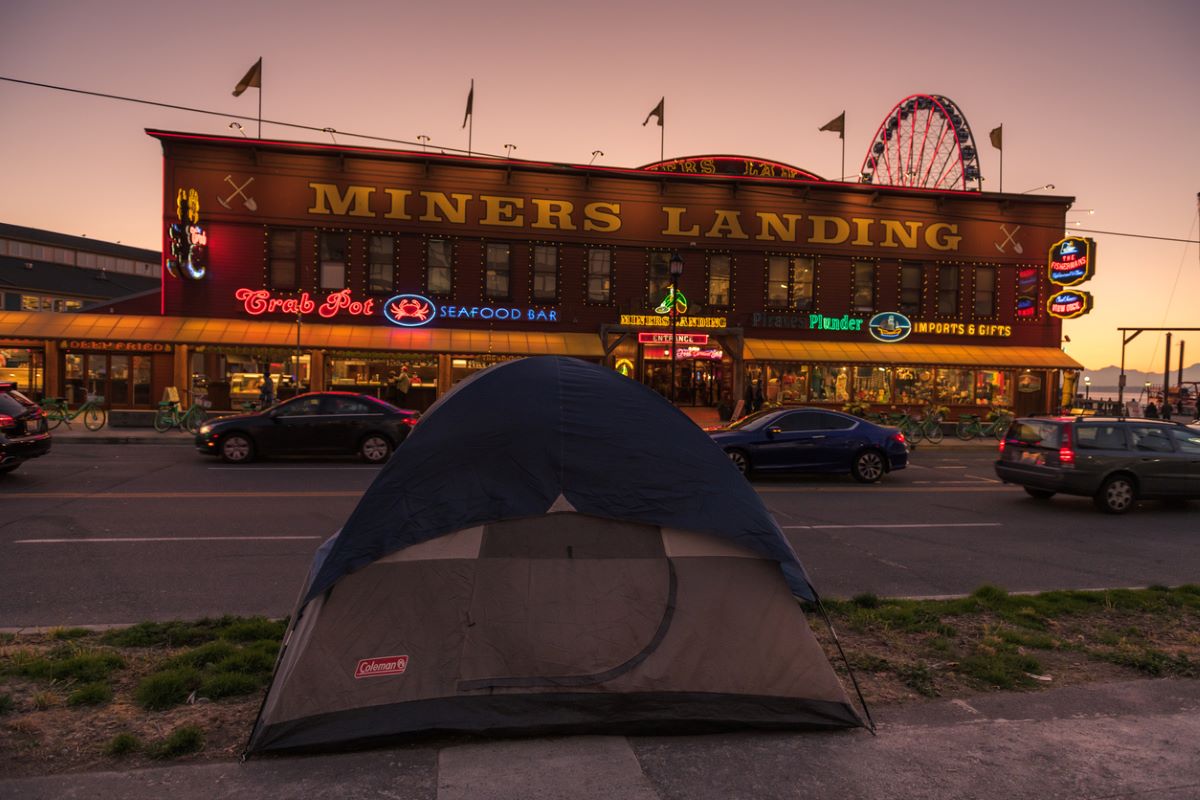 As the pandemic set in in the early months of 2020, officials in Seattle acted quickly to the unfolding emergency. Their efforts to mitigate the spread of the coronavirus led to measures that would seem far too radical under any other circumstances – like opting not to arrest people for minor crimes and closing down aggregate homeless shelters.

These temporary, stopgap measures offered a brief glimpse into how the city and its homeless services could run: without criminalizing homelessness. In fact, the city saw that police didn’t need to be involved in their programs for the unhoused at all. Plus, their absence often led to better outcomes for the people served.

The first action I mentioned, opting not to arrest people for minor crimes, surely made some people clutch their pearls in punitive horror. But for many people living on the street, it was a welcome reprieve from frequent harassment and arrests for just going about their daily lives.

It also kept a lot of people out of jail, where coronavirus exposure was even more likely than on the streets. Not to mention all the other abuses that take place behind those locked doors.

As it turned out, going a few months without arresting people for sleeping on a park bench or pitching a tent in the “wrong” place didn’t collapse society. The only people complaining about it were those who make their money off of for-profit prisons and those who just really, really like to see other people unfairly punished and should probably unpack that a bit more.

Instead of Law Enforcement, There’s JustCare

But even in the days when you couldn’t dial 911 and summon a cop or two to come down and enact your will on someone you considered too poor to deserve to share space with you, some business owners and concerned citizens still needed someone to call. Enter JustCare.

JustCare is an outreach organization that operates on the principles of community and collaboration. Rather than going into an encampment and forcibly removing everyone and all their possessions without a care or a thought toward where they move on to next, JustCare gets to know the people it serves and their unique needs. They make several visits offering food, water, and clean needles with no strings attached to build trust and rapport with the people in any given area.

Eventually, once trust is earned, JustCare workers can offer suitable, safe housing to everyone in an encampment. That way, people aren’t just moved from place to place. They are actually moving of their own free will into a housing option that meets their needs. It also meets the needs of the business or residents who called in to have their nearby encampment removed.

Somewhat surprisingly, for a program that actually respects the needs of homeless people and doesn’t just coerce or force them to leave an area for the sake of someone else’s comfort, NIMBYs love JustCare!

Even organizations like the Downtown Seattle Association and the Seattle Metropolitan Chamber of Commerce, who often oppose initiatives that show compassion to unhoused people who would dare infringe upon their profits, are supportive of the program. They have agreed to expand its reach in the future.

What Does All This Cost?

Speaking of funding, the cost of the program has predictably been one of the most criticized aspects of it. Shocking, right? Critics of the program have been unable to stop themselves from blurting out their favorite catchphrase, “it’s too expensive!”

But JustCare retorts that their costs are comparable to the money authorities would have spent to arrest and incarcerate each person for a year, with much better results. Even if they weren’t, complaining about the program’s cost really isn’t the mic drop that you think it is.

Critics need to realize that when they make these knee-jerk objections to the costs of support services for unhoused people, it’s not just a cerebral, intellectual exercise like balancing your household budget.

How expensive is “too expensive” when saving people’s lives from the genuine dangers and adverse health effects of homelessness? How disconnected from your own humanity do you have to be for financial cost to even play into that decision? Whatever the cost, it’s worth it.

We have all the resources we need to make homelessness a thing of the past. What we lack is the will to make it a priority. At both the federal and local levels, we spend a lot more on less pressing concerns. Things like community center upgrades or tax breaks for new businesses are often funded first, even though none of those things come with a body count.

Our priorities are way out of whack. We’re divvying up our city and federal budgets to important things, things that sound important but aren’t, and even some frivolous things before funding what is essential. Once that’s done and checks are written, we insist there is no way to pay for essentials to survival.

So these hand-wringing objections to the costs of life-saving programs are painfully transparent. We can all see through it. Drop the act and just say what you mean:

You don’t care if people die. Your greed is greater than your compassion for human life.

The problem isn’t a lack of resources. It’s a lack of sufficient will to distribute those resources to benefit our poorest neighbors meaningfully. Even when it’s costing them their lives.