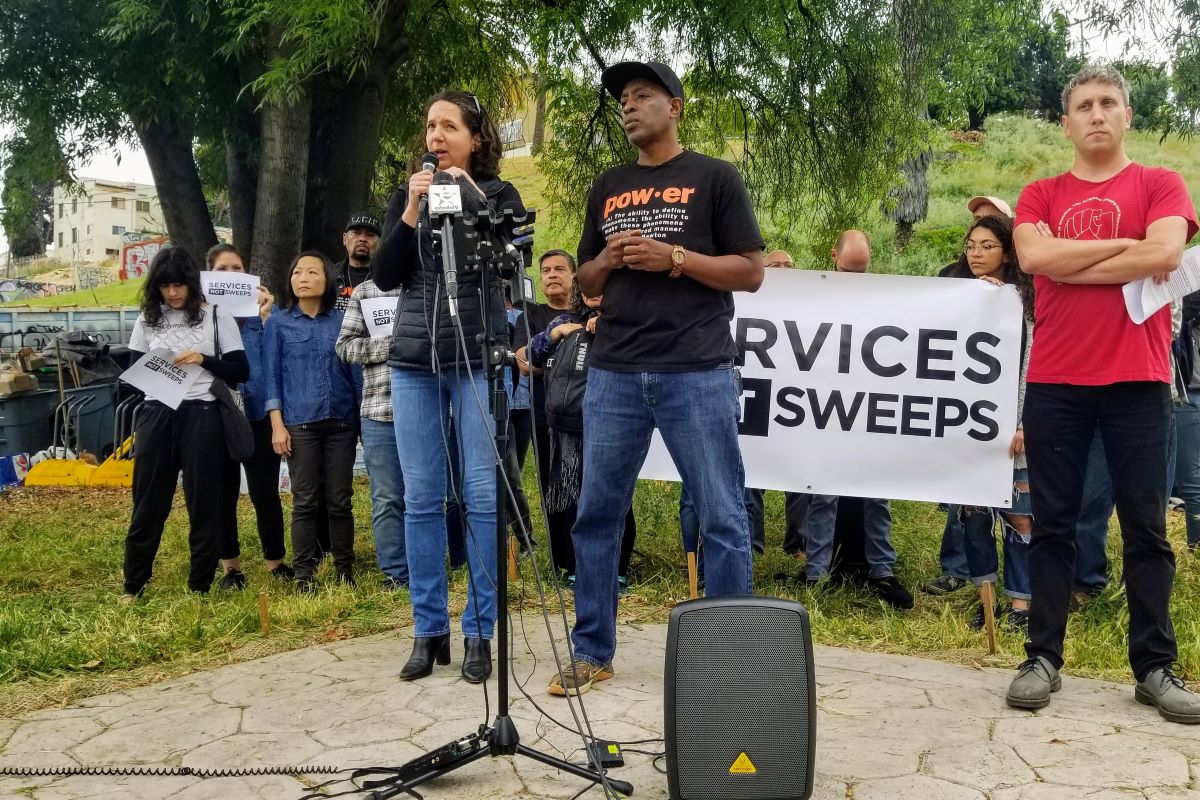 A long list of activists and community groups in Los Angeles, including Invisible People, are calling for “Services Not Sweeps” in a new campaign aimed at Mayor Eric Garcetti hoping to reform the current “homeless sweeps” that go on regularly around Los Angeles.

Homeless sweeps involve a joint task force lead by the LAPD that includes sanitation workers, social workers and city employees. Teams are deployed after enough residents in a neighborhood have complained about trash and human waste building up.

But homeless residents often find that trash is left on the streets after sanitation cleans. Instead, sweeps are sometimes used as a pretext to displace the homeless, destroy their personal property and criminalize people living on the streets.

The Current System of Sanitation Sweeps Is Flawed

On the morning of April 3, 2019, a group of about 50 came together under the banner of the ‘Services Not Sweeps’ campaign, to stand side-by-side with a local homeless encampment on Alvarado St., near the 101 freeway in Echo Park. The group is advocating for more homeless services in place of police enforcement in Los Angeles.

At the rally, Nafeesa Ansar, a 40-year-old resident of the nearby encampment on Alvarado St. spoke about some of her experiences living on the streets for the past two years. She explained the snowball effect of criminalizing the homeless. For example, a single shopping cart violation can be as much as $400 and turn into an arrest warrant for not showing up in court.

“People don’t understand it’s a notice to appear.” Nafeesa explained that after someone gets a ticket, they must go to court just to set up a future court date. “A lot of people are not reading these notices and they end up getting failure to appear.” Language barriers are a common reason why homeless residents never address these tickets. Seven failure to appears can result in an arrest warrant.

Another problem with the way that the current sweeps happen is they’re not well publicized. Notices are printed on standard 8×11 paper that can be difficult to see or easily taken down. While the city is supposed to post notices 72 hours before sweeps occur, some complain notices never go up.

Homeless residents unaware of the sweeps leave their site and come back to nothing. Or, they’re forced to move all their belongings on short notice. This constant cycle of being displaced and criminalized can be psychologically damaging.

“I start getting into a state of panic,” Nafeesa said regarding how the cycle of constant sweeps affects her psychologically. The city’s own authority on homelessness, the LAHSA, warns that encampment clearings and other municipal practices and policies makes homelessness worse and “unfairly target the people living on the streets.”

In a February 2019 report, the homeless authority reminds the public that homeless residents have the same civil rights as housed residents. It further explains how sanitation sweeps can be detrimental to the community.

“Connections built with outreach workers and other case managers may dissolve; personal identification documents critical to securing housing may be lost; and accumulated citations may put a person at risk for further law enforcement involvement.”

During the press conference on April 3, Nafeesa described the unsanitary conditions that she’s seen while living on the streets. While Nafeesa goes to great lengths to keep her area clean like many other unhoused residents do, she explains that for some, sleeping amongst rats and feces is common. This leads to others getting sick. It also contributes to the overwhelming stench of human waste and trash permeating most of the city.

“I kind of tease about how Los Angeles has a stench. Everywhere you go. And some people don’t realize that it’s human feces that we’re smelling.”

In a press release distributed on April 3, the group lists its primary demand: remove all law enforcement immediately from sanitation sweeps and replace them with social workers. Overall, the coalition wants a system in place that benefits the homeless. They want it to include services beyond sanitation to help people get off the streets. The coalition also wants the system to address other complications like mental health or job searching.

The demand for reforming sanitation sweeps has grown as the homeless population has increased 75% from 2012-2018. Year over year, the criminalization of the homeless has also increased. As the city completed its most recent tally of unhoused residents, LA experienced a historically rainy winter. Still, weekly and sometimes even daily sweeps continued.

K-Town For All is a local community organization in Koreatown supporting the Services Not Sweeps campaign. For several months, the organization has documented sweeps and mediated between the Koreatown homeless community and city council officials. “Homelessness in Koreatown has changed over the last several years.” Mike Dickerson, a rep with K-town For All said via email. “Compared to other areas, we seem to have a lot of older people, who either lived in the neighborhood long-term before facing eviction or who moved here to find a quieter place to stay than Skid Row.”

Dickerson said the visibility of homelessness has led to some housed residents demanding something be done. This creates a vicious cycle of pushing “the problem” from one corner to the next.

“The Services Not Sweeps campaign is about moving clean-up efforts away from a complaint-driven model, where homeless people are treated as something to be cleaned up, to a public health model that treats homeless people as residents of the city in need of sanitation services.” Dickerson writes.

Resorting to Arrests Rather Than Referrals

LA spends an estimated 30 million dollars a year cleaning the sidewalks, removing human waste and destroying homeless property that they deem too “bulky”. The city destroyed an estimated 9,000 tents last year. The LAPD’s 4th quarter report shows an increase in the number of tents being destroyed quarter over quarter.

“Whenever the city’s efforts on this front are criticized, they claim that police and sanitation teams are part of connecting homeless people to services. Unfortunately, LAPD’s own numbers show that these officers are making more arrests and confiscating more tents than they are referring people to services and housing,” said Mike Dickerson.

For more updates and press releases regarding the Services Not Sweeps campaign, visit their official website. 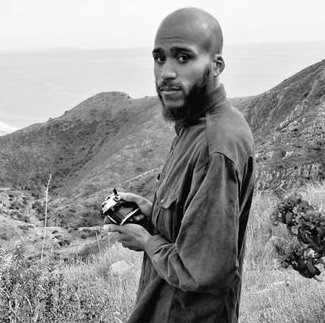