Shocking: NYC Pauses the Removal of 9,000 Homeless People from Hotels 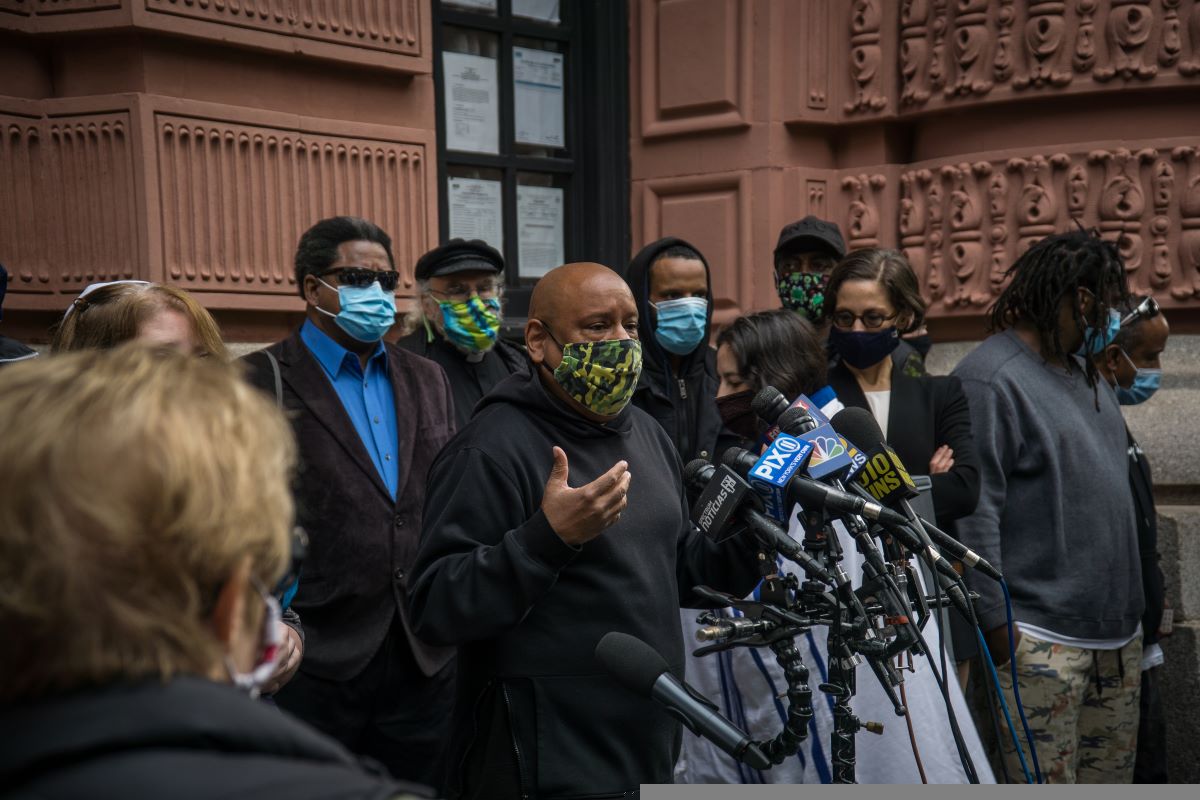 New York City, New York/USA October 19, 2020 Members of the homeless community held a press conference outside the Lucerne Hotel after leaning they were being moved to another hotel downtown. Photo Credit: Steve Sanchez Photos

New York City has long been an influential region of the US. A place of immense wealth and unparalleled poverty, the Big Apple offers a small glimpse into the heart of our democracy.

You can rest assured that anything taking place on a large scale in this infamous city is happening behind closed doors nationwide. Historical examples of this point are abundant. From the 1917 Silent Parade to the 2011 Occupy Wall Street Movement and every rally, protest, and occupation in between, we’ve witnessed New York become the demonstrable emblem of national unrest.

An Overview: Here’s What Happened When the City Attempted to Force Homeless People out of Hotels by the Thousands

The tension between NIMBYs and housing advocates boiled over, setting the tone for a sweltering summer citywide. This battle began about a year ago when the international public health crisis forced city officials to find a new, better way to resolve the local homeless crisis.

At the time, the solution seemed simple enough. With nationwide stay-at-home orders grinding travel to an unexpected halt, vacant hotel rooms became a refuge for the weary. By April of 2020, approximately 20% of all New York City hotel rooms were transformed into havens for people who had been experiencing homelessness.

Hotel programs proved massively successful at curbing the spread of the virus, reducing the number of individuals living unhoused close to one another, and cutting the spending budget.

In December of 2020, nonprofit housing leader Megan Loeb called this novel approach “a cost-effective way to stand up shelter…” and suggested that it had long-term implications. Such was the sentiment across the board when hotel programs were benefiting the general population at large.

So long as it was all about public health, hotels for homeless people were considered a perfectly acceptable solution to the budding crisis. Now, with the pandemic coming to a close, the situation has become about “them”. New York City’s split reaction to this says a lot about us.

At the Behest of NIMBY Neighbors, NYC Began Forcing 9,000 Homeless People out of their Hotel Rooms and Back into the Shadows of Homelessness

How quickly we forget ourselves once our personal hardships are lifted.

It wasn’t long before NIMBYs caught wind of the temporary relief some homeless people were experiencing through hotel programs. Out of their ignorant perspectives of our neighbors without walls, these ill-informed individuals sought to put an end to these life-saving measures.

Now with the prospect of a bustling tourism market on the horizon, NYC officials began siding with NIMBYs. The streets seemed doomed to reemerge as the same homeless epicenter they were in pre-pandemic times. While housing advocates pushed back in protest, their voices were silenced by smoke-in mirror politicians who were more concerned with hiding the homeless problem than resolving it.

For example, ABC 7 referred to hotel programs as “problematic,” claiming they were draining taxpayer funding and insinuating that homeless program participants were wild, out of control, animalistic drug abusers.

This is not an exaggeration of the article whatsoever. This accredited news organization literally described human beings like animals in a zoo, running around with no clothes on, fist fighting in the streets. However, they did not present any evidence to support such claims. They merely published NIMBY neighbor’s commentary.

Not a single homeless person was interviewed or offered the opportunity to tell their side of the story, making for perhaps the most one-sided “news story” in history.

As NIMBY’s interests aligned with public opinion and political motives, it became clear that hotels would stop housing homeless people. The decision to ruthlessly kick homeless people out of hotels and force them into “alternative shelter,” which could mean anything from emergency shelter to the street corner of another city, was made despite a 100% reimbursement from FEMA. This rarely reported statistic shatters the premise that hotel housing is a multi-million dollar drain on the poor taxpayers.

Returning Roomkeys: Advocates Did their Part to Inform the Public

The Gothamist described the grim scene at many hotels as swarths of homeless people stuffing whatever personal belongings they could fit into trash bags and boarding buses with shattered hopes. There were instances of homeless people advocating for themselves. Twenty-five people staged lock-ins, and countless more filed class-action lawsuits. These acts were heroic, and they began to sway public opinion.

In a Startling Twist, the Controversial Move was put on Pause

Just when it seemed all hope was lost, the Legal Aid Society filed a motion against the city. Citing this transition violated the rights of people with disabilities, the city was forced to stall the process temporarily.

At the moment, housing advocates have won. However, recent discussions with Mayor Bill de Blasio suggest that this is just prolonging heartache. The city continues to assure its people that hotel stays are a temporary measure at best. Meanwhile, the Delta variant of the COVID-19 virus sweeps the nation.

Key Lesson: Every Voice Counts but Long-term Solutions are Pivotal

Throughout this international public health crisis, we have seen the heavy impact people’s voices have upon the nation’s politics. However, we have also seen that many measures offered to appease the public are temporary. Now is the time to start demanding long-term solutions such as an equal right to housing for all.

A Page from Personal Experience

I once moved from a hotel to a boarding house on a septa bus using only trash bags. It was a defining, albeit lamentable, moment in my life. Even though this took place more than two decades in my past, I’ve never completely forgotten the feeling. It was equal parts abandonment and embarrassment.

The bags were so full, so heavy. Pointy bits of my possessions poked out, creating long Freddie Kruger-like gashes in the dark polyethylene. Nobody tried to help. I could feel the wondering stares of strangers as I boarded the bus. But even in that moment, my excitement outweighed the embarrassment because I wrongly believed that I had finally escaped homelessness by renting a room in a boarding house. In truth, I was just transitioning from one kind of homelessness to another.

For this reason, when I hear a story about thousands of people boarding buses with trash bags to be transitioned from one kind of homelessness to another, it breaks my heart in a million different places. 20+ years have passed, and the more things change, the more they stay the same. In 2021 as in 1999, there is a tug-of-war between social hierarchy and lives caught in the balance.

Homelessness is not this insurmountable hurdle looming before us as it has so been portrayed. There are plenty of viable long-term solutions to homelessness available, including the most obvious – just to give everyone a home.

Contact your representatives and speak out against what is happening in New York City. Together, we have proven public opinion can influence legislation. Make sure your opinion is loud enough to offset the negativity.