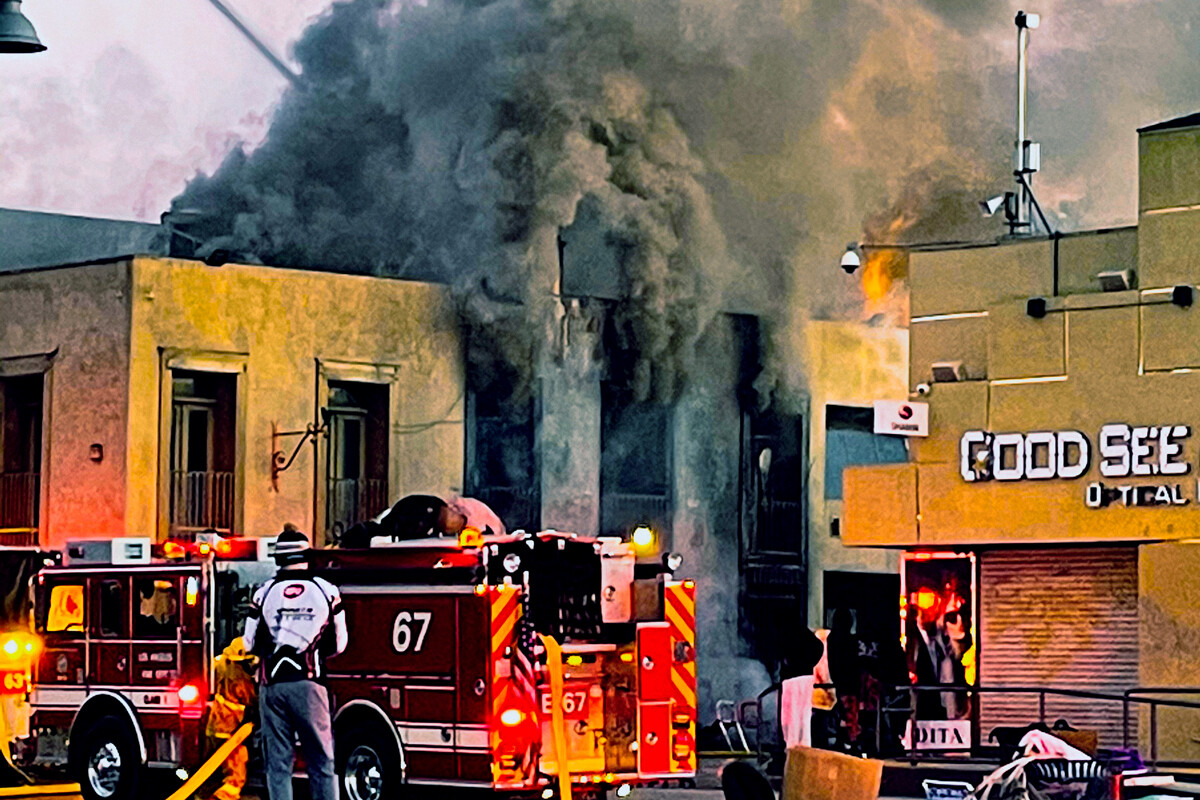 I woke up this morning to messages from a homeless woman letting me know there is a commercial building on fire in Venice. Although my homeless friend is now in Project Roomkey, she previously lived outside in Venice Beach, California. She is an artist. Like many of the homeless artists at the beach, selling art as a way to survive gave her a little bit of money and purpose.

I clicked on the link in the message and started to watch the helicopter footage of the fire. I know Venice Beach reasonably well, and there are not too many commercial buildings near the boardwalk. As I watched, I started to recognize the location, and my heart sank.

I do not support homeless encampments. They should not exist.

Besides public safety issues, humans should not have to live outside in tents or makeshift shacks. But let’s be candid – homeless encampments exist because homeless people do not have anywhere else to go.

In the last few years, even before the pandemic, homeless numbers in LA County increased significantly due to the growing lack of affordable housing and Los Angeles stakeholders doing too little too late to help end homelessness.

The news is reporting the fire started in the homeless camp next to the building and then spread. Fires are dangerous, especially in Southern California. Gladly, the news is reporting that there are no injuries in this fire. What is not going to be reported is 10 to 20 homeless people have now lost everything – either from the fire itself or efforts to put out the fire.

There is no Red Cross support when a homeless person loses their tent and everything they own.

Homeless people don’t have an income to buy stuff, so the clothes they own come from months of sifting through charity boxes to find something to wear that fits. Like housed people, photos of family, mementos of past memories, and what little they have been able to hold onto are gone forever.

The public is quick to blame drug addiction as the cause of any encampment fire. However, the truth is more often than not, tent fires are started by gangs. Gangs tax homeless people for either a part of what they make panhandling or for setting up a tent in their territory. Gangs setting tents on fire happens throughout Los Angeles, not just in Venice Beach.

Other reasons for encampment fires are more people are cooking outside or trying to survive cold nights using propane heaters. And, while drugs and mental illness can play a role in house and tent fires, NIMBYs (not in my back yard) are also setting fire to encampments.

It’s easy to blame homeless people for a fire. But no matter how the fire started, the only real solution to ending encampment fires is ending homelessness.

I know several of the homeless people living in an alley next to the Good See Co where this fire started.

My hope is this will start a push for housing, but I have already seen on social media people screaming for more criminalization. The reality is when LAPD displaces a homeless encampment, the people who lived there are still homeless. They are simply moved to a different location, so the risk of fire remains. Throughout LA County, police and sanitation workers displace homeless encampments EVERY SINGLE DAY. Homeless encampments swept to one area are pushed to a different location, and the homeless crisis perpetuates itself. 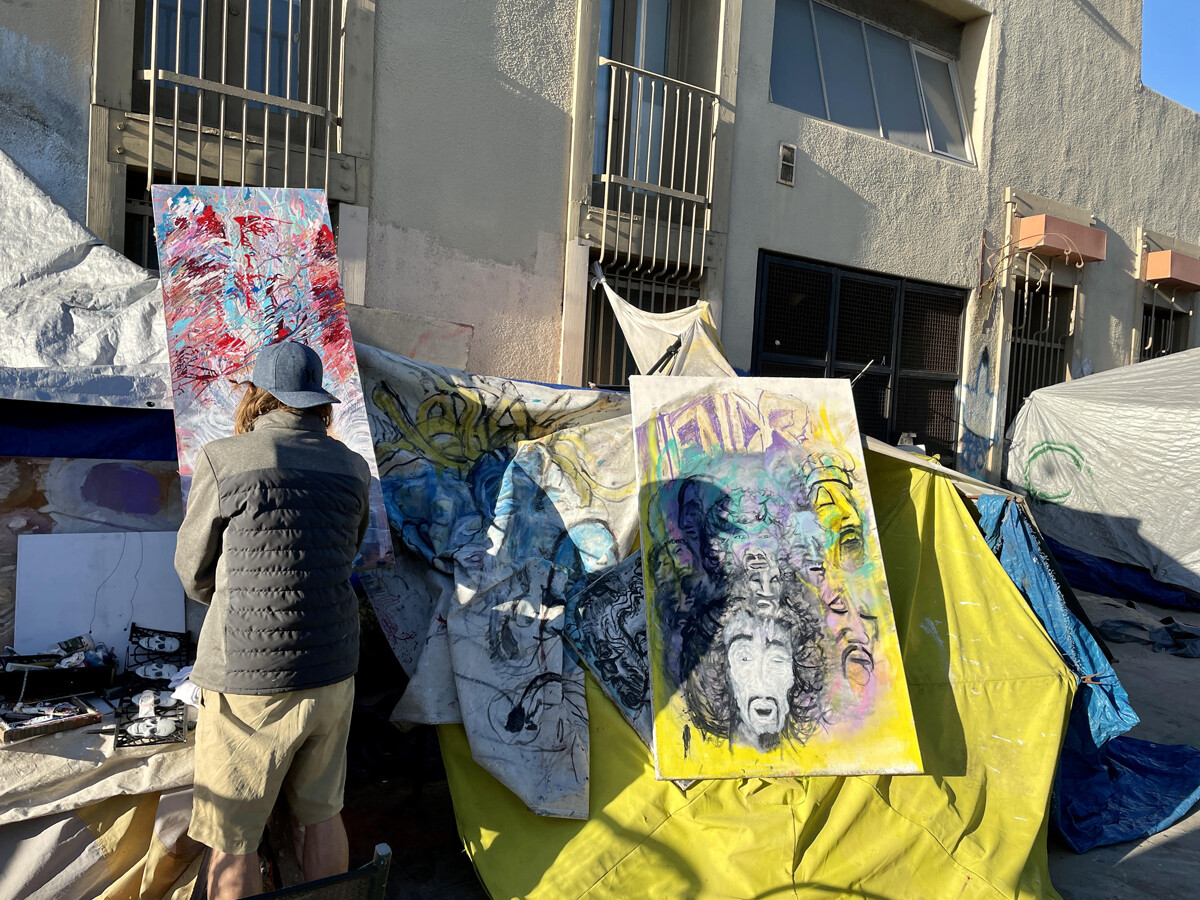 A homeless artist creates his work in the Venice Beach encampment.

Mike (not his real name) and his wife lived in Van Nuys. When they were evicted after losing their jobs, they went to Venice Beach to sell Mike’s art as a means to survive. Mike, his wife, and their small dog lived in a tent next to the building that caught on fire. They lost everything!

As unemployment rates skyrocket due to the pandemic and the expiring eviction moratorium threatens millions of renters, we are looking at an exponential increase in homelessness in the near future. New research supports this prediction with the impending crisis seeing a rapid increase that won’t peak until 2023.

Public safety is vital for housed people and homeless people. No one wants an encampment fire except those intentionally set by gangs or NIMBYs. The ONLY way to end encampment fires is to prevent and end homelessness. Demand action from your representatives today. 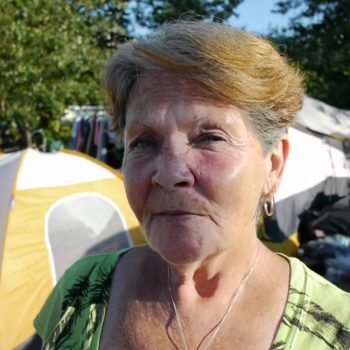 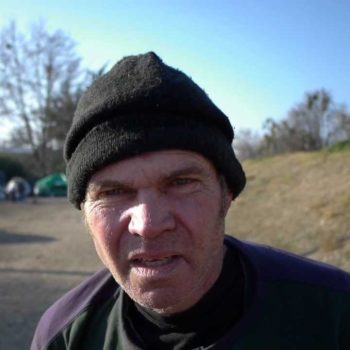