The Election Might Be Over, But There’s Still So Much Work to Be Done 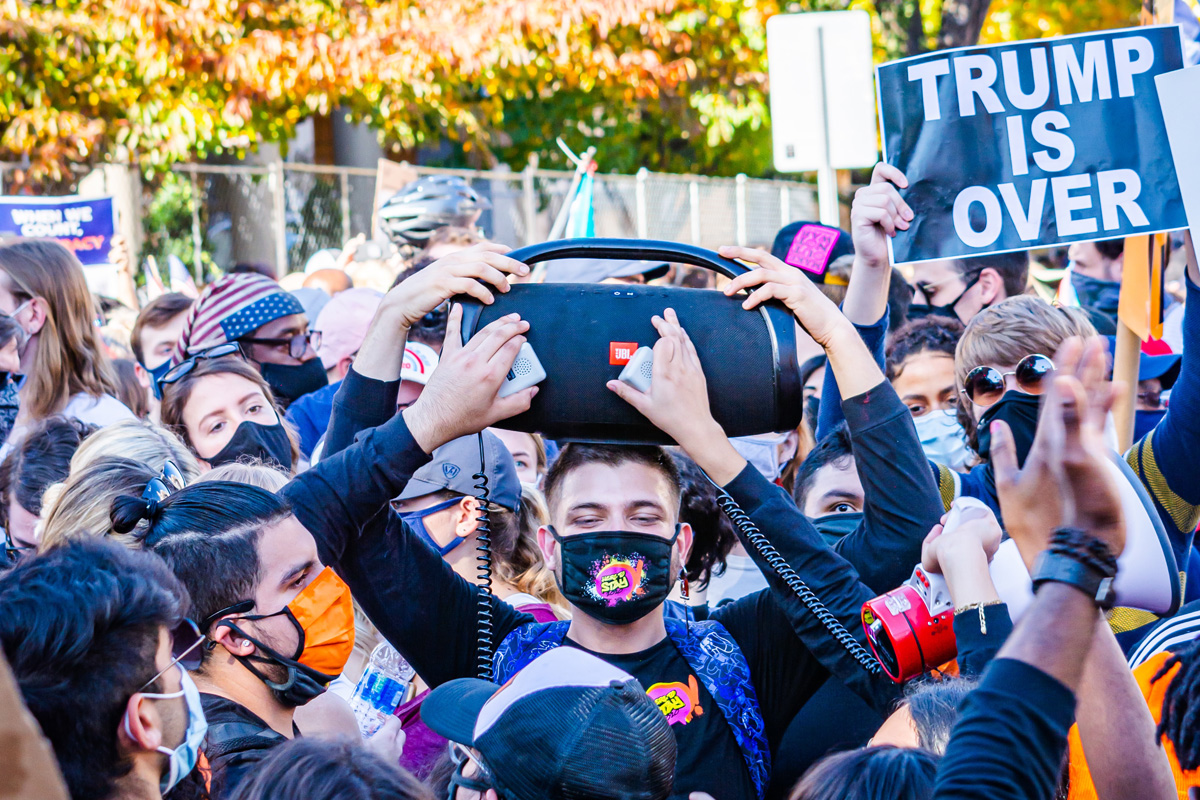 I spent most of Thanksgiving week checking in with loved ones. This year has been hard for everyone. Between sick family members, job losses, and election anxiety, many are hardly staying afloat financially or emotionally.

When Thanksgiving rolled around, I figured the best thing I could do right now is reach out and make sure everyone I love is okay. I started by asking Andrew how he’s holding up. He said, “This has been a very hard year. I’ve had a few friends contract COVID-19, but they have recovered fortunately. There were big adjustments in my family as my dad’s workplace did not renew the lease on their office and moved entirely to a work from home format.”

Kara shared with me that she hasn’t “felt that huge, post-election lift everyone else has been talking about.” Neither have I.

In fact, all I remember from Election Day is being overwhelmingly stressed. There was a lot of anxiety watching the polls, as well as scrambling to get my rent for November. I remember it was freezing cold. Also, I remember being a little bit scared to go outside that morning. I didn’t know what to expect, but I was prepared for a violent response from Trump supporters in regards to the election results.

That had me worried for my loved ones, including Andrew, who shared similar concerns:

“I have a lot of worries about far-right terrorism in reaction to Trump’s defeat. Many of Trump’s supporters believe the election was stolen from him (whether they’ve seen any evidence or not), even though most Americans moved on from entertaining that notion weeks ago.”

Kara then reminded me of what most of us have probably been thinking – the fact that “roughly half the country wanted another four years of Trump. Which means that a large number of Americans are just fine with seeing other people, animals, and the environment being hurt if they think they’re benefiting from it.”

Seeing those states turn bright red, and seeing how red it truly was, terrified me. And I know for a fact it terrifies a lot of people. Needless to say, we’re not okay. I don’t think any of us are actually okay right now.

Another friend, Kierstin Quinn, had probably one of the worst years among anyone I know. She too felt a genuine fear for the future, after seeing just how many people voted for Trump. But election anxiety was just the beginning. She also suffered two house fires, the loss of both a pet and a parent, and financial stress caused by a reduction in hours at her job.

“We have a rental home and food on the table, but we are right on the border of whether or not there’s enough money. We sometimes struggle, but we get by. I’m constantly worried that one day we might lose the rental lease. Nothing is guaranteed. When my dad died, our family income halved. While a continued fight for a better world is necessary, it still scares me.”

We live in strange times, my friends.

I suppose “strange” is a kinder way of saying “we live in a dystopian nightmare and each day just gets seemingly worse.” The absolute absurdity of it all makes it feel almost unreal – like a dream – well, like a nightmare.

The CNBC headline reads “Black Friday 2020 online shopping surges 22% to record $9 billion.” Meanwhile millions of Americans are still unemployed, at risk of losing their homes, at risk of homelessness, at risk of becoming sick, with no relief bill in sight. It truly does feel like a dystopian nightmare. It terrifies me that consumerism, that capitalism, is such a big part of our life and American culture. This reality puts us all at risk. There’s still so much work that needs to be done.

Biden being elected president isn’t going to change the fact that nearly half of Americans didn’t vote for him. The alarming truth is that it doesn’t really matter if our president has changed if we haven’t changed.

Kara said, “I don’t think Biden, or any other politician out there right now, is going to work some kind of miracle that’s going to turn things around, even if they can roll back some of what Trump’s been serving. It is a step, but it’s a step that could easily be reversed in four years, and almost certainly will be in eight, if people don’t keep pushing. In my opinion, a lot of that pushing needs to be about changing the way half the population thinks. And I’m just not sure how to go about persuading people that it’s important to try to be decent human beings.”

How do we change the way people think? How do we make others care about wealth inequality, poverty, homelessness … about the health and well-being of every person?

No doubt, that is an issue we’ve all been pondering for a long time. However, I do believe that majority of people can be, and are, decent human beings. I don’t think it’s time to give up on us yet. In fact, I don’t think we’ve even really given us a fighting chance.

At a time like this, it is so easy to feel lost and insolated. I feel glad that, even as I struggle, I know I am not struggling alone. When we fight for ourselves, and when we fight for each other, we are powerful. I am grateful that we have each other.

My brilliant and very tough friend, Lucy Bell, said it best: “However small we may be, we have power. Sometimes the smallest have the greatest impact — when we are broken, we can even be at our most powerful. Like the splitting of an atom.”

Andrew suggests that, “the most dangerous thing right now is for people to return to the ‘we’re back to normal’ mindset. Nothing would stop the momentum of social progress that’s been built up more than slipping back into the mentality of normalcy. I think our next steps should obviously be vaccination, which may be close to being achieved. But if that doesn’t work out, I think there should be harder crackdowns on anti-maskers hosting super-spreader events. Much like there seemed to be a joyful willingness seen from police departments across America to crack down on peaceful protests about other issues.”

Again, there is still so much work that needs to be done.