The Impact of Gentrification on Poor and Homeless People 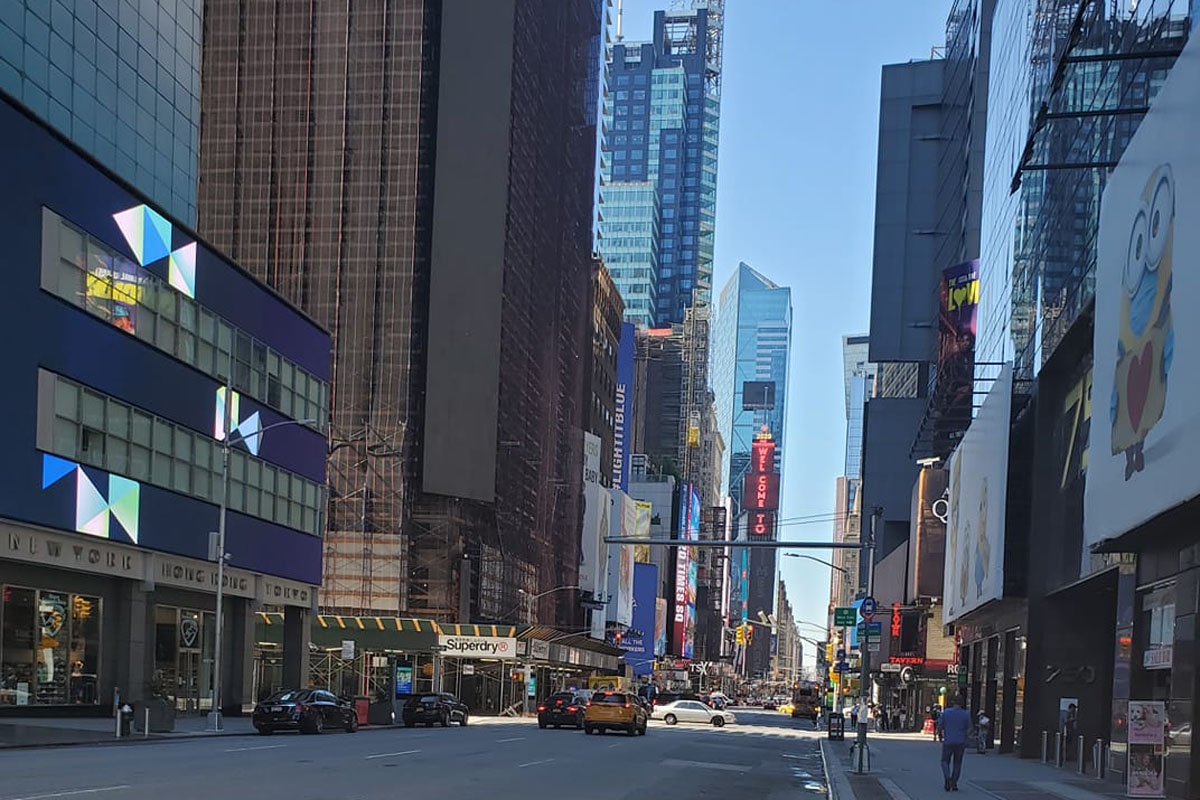 Times Square is uncharacteristically bare during the pandemic as many residents flee the city.

NYC Residents Flee to Surrounding Counties, Pricing Out Locals in the Housing Market

In 2020, I’ve seen quite a bit written about “the death of the city”. It’s the idea that huge cities are no longer desirable or even necessary in the digital age.

As a teenager and young adult, having lived my whole life in one of the boroughs of NYC, I was fascinated by visits to Manhattan. It was both glamorous and energetic. I was drawn to Broadway, where I hoped to one day be on stage (and nearly was; but that’s a story for another day), and to Greenwich Village where the truly cool people used to be.

After a few years of working in and hanging out in Manhattan, I soon discovered that I preferred the quiet country. My nerves are not made for city life. As an adult on the autism spectrum, I do not do well in environments with so much sensory overload.

Visiting upstate New York was a revelation. I felt better surrounded by nature and soon craved weekend trips upstate. So the first chance I got, I took it and moved upstate to the beautiful Catskill Mountains. I thought I had escaped the horrors of city life: noise, pollution, cars honking, sirens, congestion, rude people, rushing around, high prices for everything, and so on. I did escape all that…for a while.

Fast forward to 2020, and “the death of the city” has become the death of peace and serenity in the country, as well as poor people in my area as the city rapidly takes over this area.

A little backstory: I remember after 9/11, tons of people began fleeing to upstate New York.

At that time, they mostly packed into the Poughkeepsie area because they wanted to be near the MetroNorth railway. They could hop a train every day to Manhattan and be in Grand Central Station in 90 minutes. This allowed them to earn a New York City salary while living in an area far cheaper than any of the five boroughs or Long Island.

You might think 90 minutes on a train there and the same back each day would be a deterrent. But it’s not if you lived in any of the boroughs of NYC. Unless you were living right there in Manhattan, many inter-borough commutes were over an hour because they involved transfers, oftentimes multiple transfers and sometimes both buses and trains. The MetroNorth commute was an upgrade. Most people got a seat and the cars on the MetroNorth are usually climate controlled. They even have bathrooms, unlike the subway or city buses. People could nap, read or work on their computers as they traveled.

It was during this time a journal reported that Dutchess County, where the Poughkeepsie and Beacon stops were on the MetroNorth, was the fastest growing county in America. The county next to it, Ulster County, my county, saw some growth, but not that much. We were safe for the moment.

COVID hits and New York City becomes the next epicenter of the virus after Italy. People flee the five boroughs to the surrounding areas. This time, Ulster County is not spared because nearly 20 years after 9/11, the world changed technologically. We have telecommuting that actually works. In 2001, the idea of the face to face “Jetsons” style phone call was still crude. Not enough people had a T1 or higher line. It was impractical on a 56k modem. And even with those faster lines, you had to do it on a desktop computer. A phone didn’t exist yet that could handle “FaceTime” or “Skype”.

However in 2020, you can take a business call anywhere there is a signal. That means those fleeing the city to come upstate didn’t need to worry about a daily commute to Manhattan. They came even farther north, making the former New York state capital city of Kingston and the famous art colony of Woodstock the latest victims of gentrification.

From their point of view, it’s wonderful. They get to flee the overpopulated city and set up house in the beautiful Catskill Mountains. Close enough to take the bus or train down for that occasional meeting or a Broadway show, but far enough to be away from the city life and multitudes of germ infested humans.

From the locals’ point of view, there is a very mixed feeling. Some think it’s great. The new influx has money to spend and will spend it in this county, and in local businesses. They’ll eat at our restaurants and spend money in our Walmart. However, for those who live up here and are very poor and possibly homeless, it’s hardly a wonderful thing.

Gentrification causes rents to skyrocket, taxes to go up on houses and poor people to get pushed out of their homes.

In theory, the county could use the increased revenue to help fund services for poor people, but that is highly unlikely. Dutchess County did not improve for poor people because of gentrification.

When I first lived in Ulster County, I had friends who’d lived in this area for a long time. According to them, this has been an economically depressed area since IBM abandoned its complex. For decades, the campus has stood abandoned. A huge area that could have been developed into low income housing – it just sits there decaying.

After IBM pulled out, tanking the local economy, many stores closed. The nearby Montgomery Ward lot was empty for a long while. At the mall, Macy’s, JCPenny’s and Sears left. and the mall lost so many stores, that they erected walls where the stores were with scenic Hudson Valley photos on them. The aged Regal theater was like a relic and even it eventually left, leaving the area with no theater at all for a long time. The theater that replaced it, doesn’t even offer 3D movies!

Some growth began picking up in the area a few years ago, but in 2020, it’s exploded. During lockdown in the colder months of March and April, the amount of traffic on the roads had subsided to the point that it was like driving when I first arrived 20 years ago. It was so wonderful.

However, as soon as the warmer weather returned, so did the cars and crowds … and with a vengeance!

Even with school not in session, or summer tourism, the shopping areas were packed and the lines of traffic ceaseless. Many of these drivers are rude, aggressive and impatient. This kind of movement into an area isn’t just the death of the city they’re leaving, but the death of the community and way of life they’re invading. They bring their impatience and self-entitled attitude with them.

Ulster County has long had the problem of too many low income residents and nowhere near enough housing. But now it’s worse than ever. I know quite a few people forced to shack up with multiple roommates, a hell you’d think would only be a NYC problem. Even a room for rent in someone’s house here can exceed $600 a month!

The city-fleeing people are buying up homes and getting them dirt cheap compared to any house in the city. They then either flip them or use them as an Airbnb business.

These “cheap” houses are either serious fixer uppers or they’re foreclosures. For poor people, waiting for paperwork, vouchers, mortgage approvals, etc., is time consuming. Meanwhile, city people rush in with piles of available money and gobble this real estate up before any poor person has a shot.

One lady I know who owns a house in the area said that she keeps getting emails and calls trying to get her to sell her house. They all make the claim that they pay cash and will buy the home in any condition. Of course, as they turn these homes into more valuable property with upgrades and improvements, local people end up paying more in taxes. But many are struggling and simply cannot afford the increase and are subsequently forced to leave.

Guess who buys their house?

There is a large number of homeless in Ulster County and the rate is growing rapidly. Even before COVID, I read there was an 18% growth in homelessness here in 2018. Poor and homeless people who are willing to leave the county and head for neighboring areas are probably not safe either. It’s only a matter of time before those areas get invaded in the same way.

I see vehicle dwellers trying to find safe places to park and be left alone, but that’s not easy anymore. Where can all these people go? There aren’t enough low income residences. And what does exist has long wait lists.

As always, the well-to-do win the day and they don’t care about the consequences of their actions. The only thing poor people are good for is pouring their coffee at a restaurant or working the register at Walmart. They don’t want that same population of poor living on their road, dragging down their property values.

In the town of Woodstock itself, I’d seen the vibe change drastically over the last 20 years. They’ve ridden on the name and the guitars and peace signs, even though the actual concert of 1969 did not take place there. In the last few years we saw a shift, however to trying to bring in different tourism. They want to go back to being known as an artist community and grow the Woodstock Film Festival. Hippies in tie-dye, hanging out in the Green (center of town), have become all but absent long before COVID came to town.

I don’t know what will happen to me in the end.

But I know that I will never find anything I can afford here. Even if I could, I don’t really want to stay because in the end, I don’t want to live in an area with high traffic and population. That’s what I came up here to escape and it’s followed me. However, nowhere is in my price range. I literally have no hope of ever living as I once did, in a cute little cottage in the woods for $400 a month rent. If that even exists, it doesn’t exist anywhere around here.