Several times, I have run into the same homeless person while traveling. It’s always great to see a familiar face but also at the same time so very heartbreaking knowing that they have been homeless for that amount of time. It’s also very concerning that homeless services has not been able to get that person off the streets.

Today, Invisible People reached a milestone that I wished never would have ever happened. Twice before I have interviewed Arien while she was homeless on the streets of Hollywood. I can’t believe Arien is still sleeping outside, but then again, Jossayln has been on the streets of Los Angeles for 16 years.

This is the video from the first time Arien and I met. She talked candidly about the harassment woman go through on the streets. Today she talked about being raped on her third day of homelessness.

Last October I happened to run into Adrien again. Her video interview here where she mentioned attempts to kill herself prompted the Los Angeles Homeless Services Authority (LAHSA) outreach team to go visit her. They helped her with clothes and hygiene products and placed Arien on a housing list, but there are tens of thousands of homeless people in Los Angeles and not even close to enough housing.

In this interview, Arien talks about being handcuffed by police for putting her tent up too soon. Homeless people cannot pitch their tents until after 9pm but because it was cold, Arien started to set her tent up at 5pm and almost got arrested.

Arien is not homeless by choice. No one chooses the streets as a
lifestyle. She occasionally gets work as a security guard but when her employer finds out she is homeless they let her go. 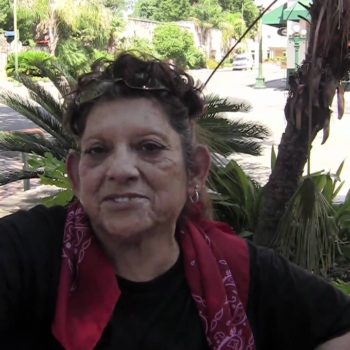