Seattle’s homeless encampment (dubbed “Nickelsville” after Seattle’s mayor) is unlike anything I have ever experienced. Sure, it’s a tent city. But it is also a community in every sense of the word. But, unlike most communities, Nickelsville is at the mercy of the city of Seattle. Already this year, Nickelsville has been bulldozed seven times and forced to relocate. When I was there, they had been in the same location for ten days straight (a record). At their last location, they were only there four days before being forced to move.

If you think it’s hard to remain cheerful when you’re constantly being uprooted, you’re right. Which is why I found James so interesting. When I met him, he was building a kitchen table out of shipping pallets. Although he moved here from Jackson, Mississippi looking for work, James was still unemployed when we spoke. If not for Nickelsville, he believes he’d be up living under a bridge.

I am so happy to tell you that James did find work the day after this video was filmed. He found a job working as a forklift operator (and he didn’t even have to move to Alaska… you’ll have to watch a video to smooth that one out!). 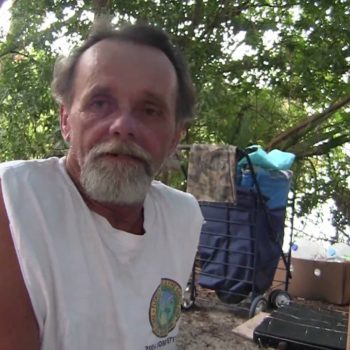