This interview was recorded at a protest blockading homeless sweeps around the Hollywood Bridge Housing. Bridge Housing is just a new sexy term for a homeless shelter. The city of Los Angeles wants to give the perception that these shelters are only temporary for homeless people to be placed into housing, but since there is no housing, few exit the shelters.

To get the communities to allow Bridge Housing, the city promises homeless sweeps that they call Special Enforcement Zones. When the Hollywood Bridge Shelter opened some time ago, I started sharing on social media how ridicules it is to place 72 people inside and then disrupt the lives of hundreds of homeless people with criminalization. Los Angeles spends over $30 million on homeless sweeps. That money could be used to build 15 shelters or many other much more practical uses. The criminalization of homelessness is a waste of taxpayer money.

I first met Nicholas a few nights earlier at a homeless friend’s tent. We got into a lengthy debate about advocacy. My first impression of Nicholas is he was a kind young man and really smart.

Nicholas shares about how challenging the constant displacement and harassment of homeless people who have nowhere else to go. He says he has to find new ways to survive every day. Nicholas once lost his birth certificate and social security card in a homeless sweep, and if you are not aware, replacing documents for identification is extremely hard.

During the pandemic, the Centers for Disease Control and Prevention has recommended that homeless sweeps are stopped because displacement is a risk to public safety. Los Angeles, like many communities, reduced the number of homeless sweeps but never actually stopped. Now, the city has authorized sweeps to continue at full scale going against CDC guidelines.

Nicholas was first homeless with his mother at 12. He remembers having his 13th birthday at a homeless shelter. You’ll see in this interview, Nicholas is very self-aware. Given the opportunity and some support,  Nicholas has a strong future, which is where you come in.

If you’d like to learn more about homeless sweeps in Los Angeles and to support advocacy working for smarter and more human solutions, visit https://servicesnotsweeps.com 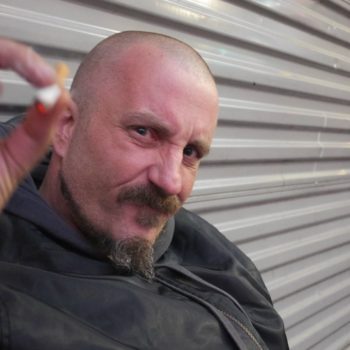