Three years ago Randy walked out of a relationship and has been living outside homeless ever since.  Syracuse winters are bitter cold, and this winter has been one of the worst. No one should be without adequate housing, especially in extreme climates.

Randy’s hand is frostbitten. When he talked about the black falling off my heart stopped. I can’t even imagine the fear and powerlessness Randy must feel.

I happened to be with John Tumino, who runs a local ministry reaching out to chronic homeless people, and John told me he had taken Randy to an emergency room in the recent past. Sadly, frostbite is not the worst of Randy’s health issues. He has a serious heart condition, yet the first he can get in to see a doctor is over a month and a half away.

Randy survives by recycling and panhandling. He told me he was recently arrested for panhandling and given 30 days in jail.  Criminalization of homelessness is on the rise and it’s also the most expensive way to deal with our homeless crisis.  If your community supports passing laws that put homeless people in jail, just open your bank account up to pay more taxes. Plus, after jail people are just placed back on the streets so the problem gets worse, not better!

Special thanks to In My Father’s Kitchen 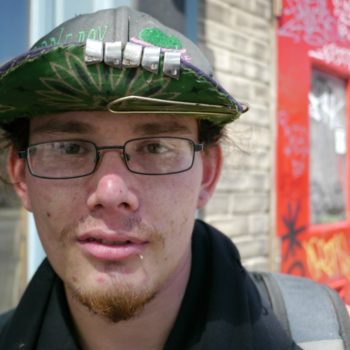