It was an extremely hot day in Washington D.C. You could not miss Roman sitting on the sidewalk with close to a dozen full bottles of water in front of him. What’s interesting is even though it was very obvious Roman had plenty of water, people still kept putting bottles of water at his feet and not the worm medicine he needed to help his dog!

One of the big issues in homeless services is people feel they know what homeless people need without even asking them, and in this situation, clearly ignoring what the homeless person needs to preserve their own wrong paradigms about homelessness.

Most people just want to feed homeless people a meal, but a sandwich is never going to help them get out of homelessness and better their lives.

Roman’s parents kicked him out of the house on his 16th birthday during a snowstorm. He went and squatted in an abandoned house. The police came. Roman was arrested.

When he was released, Roman hitched a ride to Florida to a Rainbow Gathering and was introduced to the traveling scene. He then started hopping trains!

Roman talks candidly about the traveling lifestyle and hopping trains including run-ins with the law for shoplifting. His story is important because it shows how the general public literally ignores a homeless person’s real needs. Roman’s story also highlights how homeless youth find community with other traveling homeless youth and it turns into a lifestyle.

If we are ever going to end homelessness we need to listen to people experiencing homelessness and have better support for youth in trouble!

Before all you animal lovers start commenting, I left Roman with enough money to help his dog and to get himself something he actually needs.

Clearly, he had enough water! 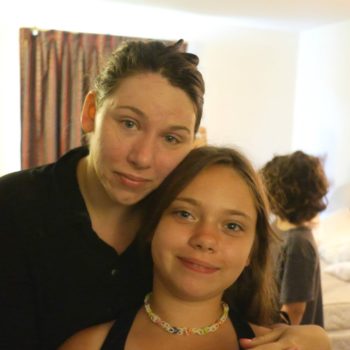 Emily and her children 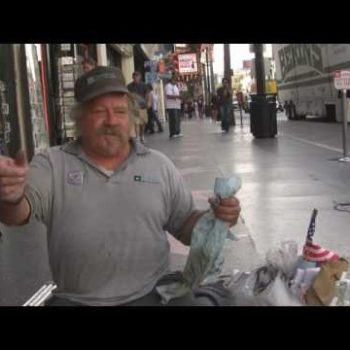