I’ve known Scooter for a little bit, yet this was the first time we met in person. Over the last year or so, if I tweet out I was having a technical issue with video gear, the guy would work overtime to help me find a solution. Interesting, Scooter is homeless. He lives in a van parking in a New Jersey Walmart parking lot.

Scooter lost the house he lived in for 27 years and has now lived in a van for 3 years. He didn’t lose his house because of the economic crisis, but because of a few bad decisions and health issues.

You can find Scooter on twitter as @scooter_NJ. He also writes a blog, which I found out about when I bought him coffee at McDonalds. The guy behind the counter, I think he is a manager, won’t touch Scooter’s mug, or allow the other workers to fill it up. So he fills a paper cup up and then pours it onto the mug. He then throws the large paper cub away, and that wastes money. You can read about it here.

Scooter is a huge Glenn Beck fan. I didn’t even know Glenn Beck had a subscription-based television show until this interview.  Scooter wants is to be able to watch Glenn Beck via free wifi. If any of you have connections to Glenn Beck, let’s try and get Scooter a subscription, and maybe even Mr. Beck will visit Scooter and do a show on America’s homeless.

You may look at Scooter’s situation and think it’s not that bad. Well, trying living in a van in a parking lot indefinitely. Even though he is not sleeping on the streets, living in a van is not by choice, and it is homeless, and it is horrible. One of the fastest growing demographics in homelessness is mobile homeless. People lose their jobs, then their apartments, and then try and stay in their vehicles as long as possible. Some people like Scooter are lucky. Scooter wants to survive and has survival skills. Many people are not so lucky. 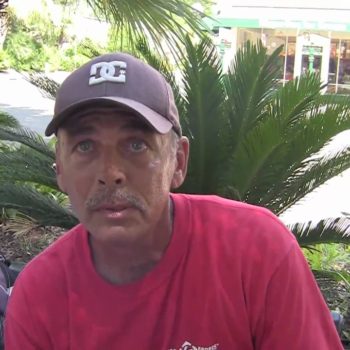