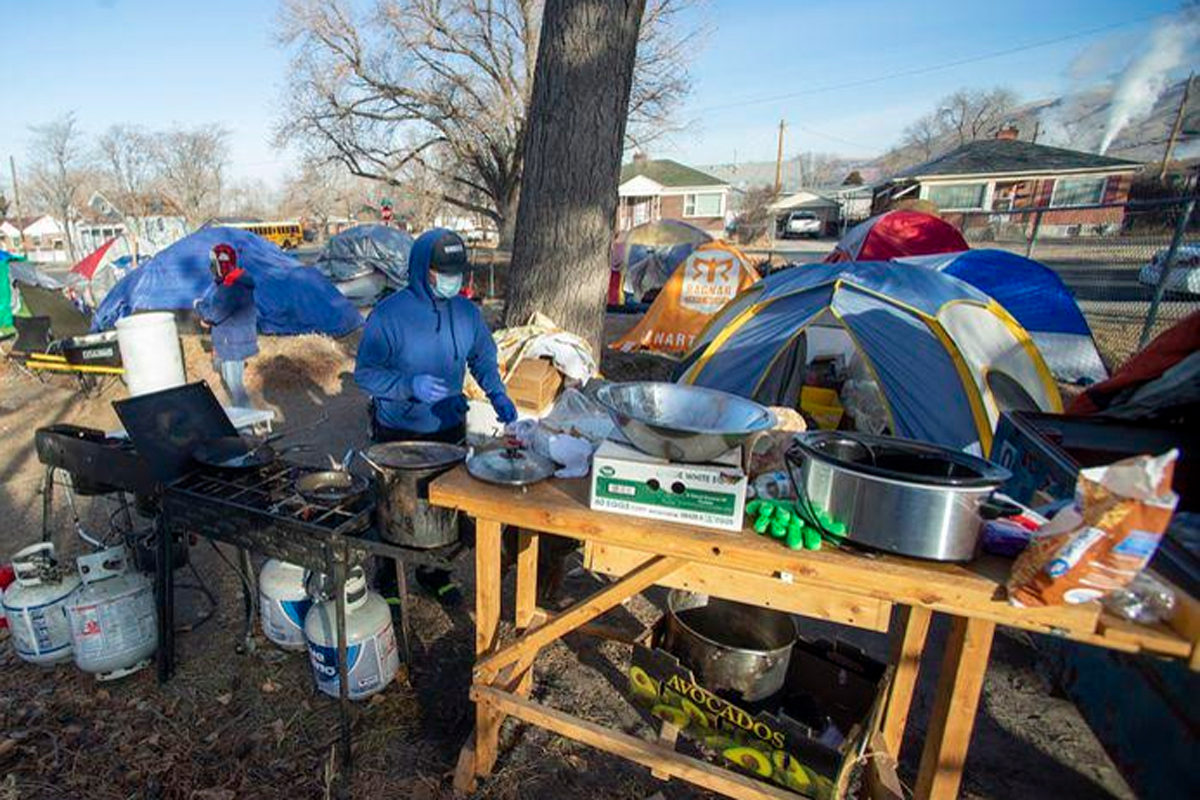 Darin Mann runs a non-profit farming cooperative just west of Salt Lake City. He donates regularly to homeless people, but he doesn’t stop there. He also visits homeless encampments and gets to know the people living there. In 2018 he made a run for state representative, unfortunately losing in the primary. He has also mentored inner-city kids in boxing programs and stays active in programs to assist homeless people. It’s quite obvious that compassion and empathy come naturally for him.

Like many of us here in Utah, he has been appalled with the heavy-handed way that Salt Lake City has been clearing homeless encampments. The sight of police showing up with dumpsters and heavy machinery is frightening and frustrating to the people in the camps. If a homeless person is not present to fight to keep their property, it is just scooped up and thrown away. In sub-freezing temperatures, they have thrown away tents, blankets, and other cold-weather gear that is necessary for survival. A local homeless advocate named Carl Moore showed up with a truck and trailer to try and save the belongings of the people in a camp that was being cleared. But he was arrested, and his vehicle was towed.

This is the same old, ugly game of human shuffleboard that has never been successful anywhere. Outlawing homelessness has always compounded the problem. The elimination of one camp inevitably results in the establishment of another. Darin thinks the goal is to shuffle them into another zip code so they can be somebody else’s problem for a while. In the middle of a pandemic, this pattern of harassment seems unconscionably cruel.

Experiencing homelessness is trauma all by itself, nothing needs to be added.

Right now, the worst dehumanizing element is the fact that homeless people have been locked out of every public bathroom in Salt Lake City. The state, despite wallowing in surplus money, refuses to even set out porta-potties. From 2008 to 2019, Utah was the richest state in the union. They can afford a few porta-potties.

In 2019–2020, Utah built three new shelters far from downtown Salt Lake City. The program was specifically designed to eliminate the presence of homeless people downtown, particularly the part of downtown around the Mormon temple and the City-Creek Mall, the Mormon Church’s multi-billion-dollar shopping/banking/business center. But the plan backfired spectacularly. Hundreds were tossed out in the cold with nowhere to go, so they stayed near downtown. This was because the new shelters had a total capacity that is 400 beds fewer than the shelter they replaced. Simple math reveals the problem here.

As Darin got to know more homeless people in the encampments, he felt a stronger urge to act.

“Life happens to all of us, but we don’t have to lose our humanity by treating unsheltered people like pests or vermin,” Darin said.

Darin invited a couple that he had grown to know well to set up camp in his yard in hopes to provide a safer place to live where they wouldn’t be harassed. He also allowed them access to a bathroom in his home. His rules were simple: No drug use and No violence. One strike and you’re out.

Eventually, one tent became two, and soon his yard held a population of about 15. The tents were kept neat and they constructed well-tended fire pits for the telling of stories and warming of hands. The camp was named “The Village Camp.”

Just like that, Darin astonished the local and state government. His reasons were clear, and he was careful, as he did check backgrounds for violence. But this was something new, and the city was unsure how to respond. No one had ever done this before. Darin wanted to show that unhoused people were every bit as human and deserving of dignity as the housed.

It wasn’t long before the city came knocking, however. They initially gave Darin 10 days to clear out “his” camp. As the temperature still dipped below freezing every night, Darin used his political acumen to keep the camp open until a better solution to the crisis came along.

His neighbors were mixed in their reaction. Most were wary. But the problems that people feared most never materialized. The citizens of the camp, although not required to, took to the task of helping out wherever they could, like helping to prepare Darin’s fields for spring. As with their benefactor, they kept busy. Then there was the night a camper alerted police to a break-in, and the burglary was thwarted. Although there were still detractors, most seemed content to wait out the winter.

But then winter killed.

A couple that Darin had grown close to, Brandy DeGarmo and her boyfriend, had taken burning coals from a fire pit and placed them on rocks inside their tent to fight the bitter cold. By morning, carbon monoxide levels had increased to a deadly level, and Brandy had passed away. Her boyfriend had more than the lethal level of carbon monoxide in his blood, but somehow he survived.

In a sad replay of what happens over and over among homeless people, Brandy died for want of warmth. It was painful for Darin, who described her as, “vivacious and sparkly.”

On any given year, all over the country, over 700 unhoused people die for want of warmth. It’s hard to accept.

Utah is ridiculously wealthy, with a $1.5 billion budget surplus to go with the LDS church’s fortune of somewhere around $100+ billion. The LDS church, of course, has ruled Utah since 1847. While led by religion, Utah seems to have developed a blind spot to their glaring lack of compassion. Every year in Utah, people freeze to death, people starve to death, people die for want of medicine, of overdose, of despair, of heat exhaustion in the summer. The high desert has two basic seasons: deepfreeze and blast-furnace. There’s not much in between.

In the aftermath of the tragedy that took Brandy’s life, Darin reluctantly agreed to close the camp.

He managed to get all of his campers into a hotel for the remainder of the winter. He acknowledges that having a homeless camp in his yard was untenable in the long term. However, he wanted to get people’s attention and do his part to destigmatize homeless people. He has friends among them and recognizes their suffering.

When I experienced homelessness, I’ll never forget how painful it was to see the disdain and even revulsion in other people’s eyes. Darin brought those in need into his yard and his home and suffered no ill effect.

Outside of Brandy’s tragic death, Darin said that his experiment was a beautiful experience that he would do again if he could. When one of his neighbors said that his experiment had been a failure because of what happened to Brandy, Darin pointed out that now Brandy has a name and people would remember her. Had she died out in the abandoned rail yards somewhere, she would have just been another statistic, another number, and her partner would likely have died as well. Utah averages about 113 deaths a year among homeless people, and most of those deaths occur in February when people freeze to death in Salt Lake City’s frigid cold.

It’s been over a month since the tragedy in Darin’s yard, but some good has come of it.

Spencer Cox, who is Utah’s freshman governor, announced the state would be changing its response to homelessness. They will establish a central committee that will replace the current system of multiple operators with multiple approaches. The state will provide $50 million in funding with $730 million more pledged from Utah’s wealthiest donors.

This is truly a watershed moment. The primary focus will be on getting people housed instead of chasing people around with bulldozers and dumpsters.

In a sign that the state seems to be taking this new direction seriously, they have announced that there will be a traveling courtroom in a tent, complete with a judge, clerk, and bailiff. The purpose of this traveling court will be to expunge all the tickets related to just being alive – charges like sleeping in public, camping on public property, drinking in public, etc. When I was homeless, I knew people with literally hundreds of these petty tickets. Other misdemeanor charges will be expunged if it is possible.

I believe Darin’s actions served as a catalyst in Utah’s shift in its treatment of homeless people. The image of Utah letting people die from the elements and appearing indifferent to people’s suffering is not a good look. This becomes evident when a private citizen shows compassion for homeless people while the government simply pushes them around.