Who’s Fighting for the Homeless In Rancher Housing Battle? 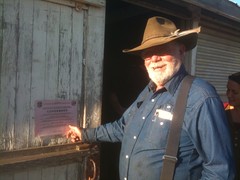 Last week, Daniel De Vaul was arrested for the conditions in which he was housing the homeless on his ranch in San Luis Obispo. California. Since this story broke, many people have been divided on this issue. Should the rancher be lauded for providing housing to the homeless? Or punished because of the awful conditions of his property?

Yesterday, I traveled out to Sunny Acres Ranch to meet Dan Du Vaul and provide an exclusive first look into the ranch and the story behind the headlines. I was excited to talk to Mr. De Vaul because I was told he’ll be appearing on Larry King Live and Good Morning America later this week. That said, I am not the mainstream media. I wanted to move past the media spin and hear the voice that matters most: the formerly homeless people living the ranch. Though there are a few notable exceptions, the people living on the ranch have largely left out of the media discourse surrounding the rancher debacle. 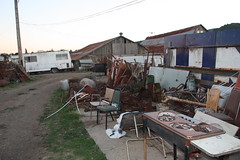 When I hear the word ‘ranch’ I think rural. Actually, Sunny Acres is not rural at all. It’s only a few blocks past a golf course, a middle school, and shopping. His neighbors are just 500 feet away and a housing development sits directly across the street. As you’ll see in the pictures and videos below, the ranch looked like a junky country barn. Although people are recovering from drug and alcohol addictions here – which is critically important – this should not trump important health and safety issues. These issues must be addressed. I was relieved to hear that the ranch does not accept children.

I understand that the city has tried to work with Mr De Vaul on several occasions to clean up his ranch. But as a stubborn and ornery man (both good traits in my book), Dan won’t play any game but his own. This is unfortunate. Sometimes, for the good of everyone, you have to compromise. 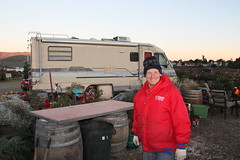 Jimmy and Randy – two of the Sunny Acres residents I interviewed below – were a pleasure to meet and talk to (see below). But this is precisely why I found their substandard living environment unacceptable. Sunny Acres charges $300 a month per person to live there in a 10×12 shack with no plumbing that is not up to code. Sure, it’s affordable. But it is far from safe or decent housing. I don’t think that because a person has experienced homelessness or addiction they should have to “get by” in sub-standard living conditions.

After visiting the ranch, meeting Dan, some of the residents, and case managers, I’m still torn on this issue. Clearly, Dan’s intentions are in the right place. He doesn’t just talk about fighting homelessness; he is in the midst of battle. Though he should be chided for the conditions in which he is housing people, this remains a critical and unmet need.

Our federal and local governments have tried to mend the safety net, but the system remains broken. As the social worker I interviewed, Jennifer, points out, often homeless services are so segmented people fall through the gaps in the safety net. What’s more, the communication breakdown between nonprofit and government agencies often results in a confusing mass of services that is impossible to navigate. Maybe this is why Sunny Acres works; it fills the gap because Dan takes everyone (but kids) and there is very little bureaucracy.

Perhaps the community can learn from De Vaul. Clearly, he has a program that is working; people are finding stability and sobriety on his ranch. It’s cost-effective and I bet the “Sunny Acres Model of Recovery” can teach us a few things about saving lives and money (that is, beyond neglecting physical housing conditions… but I digress).

The biggest concern I had after visiting the ranch is the political hornet’s nest this is creating. Several locals said the attention on this story is polarizing a community that is already divided on this issue. And who will inevitably lose this battle? Those without a home in San Luis Obispo.

If you really care about the people living on your property, Mr. De Vaul, give them the safe, decent and affordable housing to which we are all entitled.

Stories from the Ranch

Interview with Dan De Vaul. Jennifer, a mental health case worker for Santa Barbara Count joined us for the interview. (interview was before my tour of the ranch and my end comments were cutoff. Basically, I closed by saying this is an important issue and the SLO community needs to really look at all the facts. I see both sides. But as I have said in this post safety of people living on the ranch cannot be overlooked)

Photo sideshow. (flash would not work inside the barns)

Randy has lived in a 10×12 ‘garden shed’ for four months now. He credits Sunny Acres for his sobriety.

Jimmy is a Vietnam veteran who has lived on the ranch off-and-on for seven years. He has been clean and sober for two years.