You’re Not an Addict … How Did You End Up Homeless? 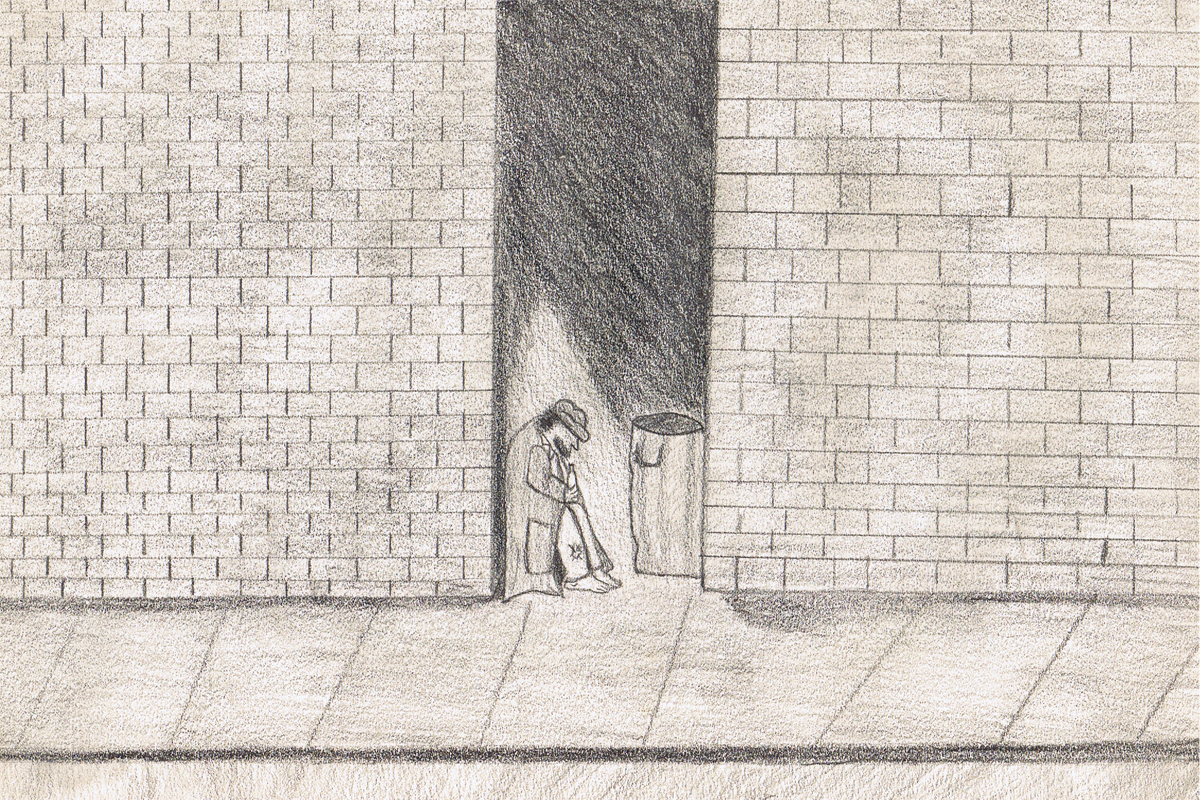 10-year-old Loki submitted this drawing for her fifth-grade art assignment after seeing a homeless man in NYC.

When most people think of homelessness, the image of an unwashed person lying in dirty clothes on a city street comes to mind. All the public sees is the current reality of that person. It’s never the story that brought them to this state.

I remember when I was a 10-year-old child, and my adoptive parents had an errand in the city. We left the boroughs and headed into Manhattan. It was a Saturday. I recall seeing a lot of people shopping in the stores we parked near. Among all the people going about their business, I saw a man sitting on the ground against a filthy building. The image upset me. He looked pained and held a bottle of something in his hand. Sitting there, mumbling to himself, he stared out into nowhere.

He had a filthy coat and no shoes. He had a dirty, crumpled hat and his hair was frizzy and matted. His face was dirty and I could not see his eyes from the parking spot we sat at.

My father was sitting in the driver’s seat and I asked him to explain what was wrong with that man. My father looked over and said, sometimes people make bad choices and they end up like that. That’s why he wanted me to get a good education and make good choices. He said if other kids pressure me to drink or take drugs, to never do it. He said they might think they are being cool and grown up, but they never think that could lead to them ending up like that man on the sidewalk.

My takeaway: homelessness was only for people who succumbed to peer pressure and turned to substances that lead to addiction. To my young mind, it was impossible to fathom anything else would land somebody in homelessness.

Not long after, a school assignment required us to use nothing but a ruler and pencil to create art using lines. Well, my lines turned into a brick wall. The house I grew up in was brick. I had often thought about the patterns of the bricks when I played in the yard.

But as the creation progressed, I stopped thinking of the bricks in the wall of the house that were clean, bright and red tones. Instead, I began thinking of the dirty color bricks that matched the graphite of my pencil. I thought about Manhattan, where the buildings look gray and dirty. I thought about that barefoot man sitting against the brick wall. Before I knew it, I drew him sitting in that alley as I recalled him.

I turned that into the teacher who was simultaneously impressed and horrified that a 10-year-old would submit such dark and serious subject matter. My ability to see the dingy world of that poor soul was something that emerged from the paper. The vision of him burned to this day on my synapses. I felt sadness and loneliness from him on a level I’d never seen before. It made me wonder all sorts of things about who he was as a child and how this happened to him.

Incidentally, I did receive an A on the assignment.

The other kids mostly did checkerboards and diagonals and geometric designs with their pencil and ruler. But I drew what could be a panel from a comic book. I was a huge comic fan even in an era with few female readers. Looking at the picture, I thought, “Imagine if Wonder Woman found him there? She would help him, or Superman.” All I wanted was for that guy to get help. A man I stared at for 20 minutes when I was ten years old. I never could have imagined that I would end up like him. Sort of.

When the time came in high school, I was not once tempted to try any drugs. A sampling of booze kept for parties under the kitchen cabinet was enough to convince me that it’s all disgusting!

I never tried alcohol and I have never been drunk. And I don’t feel I am missing out anything. I’ve seen it turn beautiful young women into disheveled alcoholics. I’ve seen people land in the hospital with their stomachs bleeding from it. There is no glamour in the business. I did not end up homeless and in poverty because of drugs or alcohol as the public believes all homeless do.

However, I did end up this way due to bad choices. Some made by me, some made by my adoptive female parent. She insisted I do everything her way, refusing to send me to school for anything I might want to pursue.

If I can impress this on anyone reading this that has an autistic child, PLEASE do not try to force them to conform or become what you think is best. If they are allowed to pursue their passions and special interests, they can become amazingly successful people in life.

Trying to force a square peg into a round hole, however, will never work out well. The square peg will either be only partially in the hole or break all together.

So floundering around, I finally earned a general studies degree. Attempts to follow my bliss were not easy. I was not prepared for the real world. However, I was on the brink of success once, right on the brink. But I had to make a choice and it was one that changed everything and sent me down this path.

You see, I’d been a live-in care giver to a beautiful soul with Down’s Syndrome. He’d come to see me as being “just like his mother.” He loved me and was very attached. Had I taken that opportunity I spoke of, I’d have had to leave him. I knew his evil family would immediately have sold his home and removed him from his life.

In a moment that lasted an eternity, I decided to turn down what would have been the best opportunity of my life. It would have led to what I wanted and to success. But at 24 years of age, I had no way of knowing it would be my last chance. So I chose my Down Syndrome friend to protect him from what I knew would come. As it turned out, I only managed to get him two extra years in his home and then we were both tossed out. He died, true to his word, shortly after we were separated.

From that point forward, nothing has gone right.

No good opportunities came my way again. No second chances. Worse, I began developing many issues with autoimmune and chronic pain … physical disabilities on top of being high functioning autistic.

Years later, when I met my ex, I thought it was real love. I decided that maybe a home life is what was meant for me, but that soured quickly. He didn’t love me – he used me then discarded me.

I look back and I see how many times I put the needs of others first. From my autistic brother to my Downs Syndrome friend to my narcissistic ex with untreated bipolar, as well as many other people. I was always working to make it okay for somebody else. Looking back, some of them were deserving of help and some were certainly not. I sacrificed in many ways for others because I believed I was doing the right thing. My moral compass always points this way. I have never seen myself as someone important or special.

Instead, I see myself as a square peg with no hole to fit into. I knew where the other square pegs were, but that ship sailed and now it’s too late. I am not saying I regret those acts of helping all those people. But, in the end, I face the reality that my life has essentially been a complete waste and a total failure. With only one glaring exception, it has all been for nothing … just endless suffering since childhood.

Society finds no value in a person like me.

In this society, compassion is a euphemism for weakness. Putting others first means little in a society whose motto is: “Look out for number one.” So while the image of that “bum in the street” haunts me to this day, I cannot help but question how I am any different from him.

We both ended up homeless, destitute and alone with no way out. When I say “alone”, I do not want to give the impression that I am lonely. I have never once felt lonely. Busy with art, writing, crafting, sewing, designing things and reading, I crave alone time. What I mean by “alone” is that I am trapped on a planet where I do not belong. There is no one here who understands me even a little bit. There is no one who can or will help me out of this mess.

The next time you walk over a homeless person lying across the door of Starbucks or pass a woman pushing a shopping cart filled with all her worldly possessions, think not of how they are now, but who they might have been. What they could be if they had help. Sadly, most people do not view homeless people as fellow beings. Instead, they are viewed as human trash, unable to take care of themselves and therefore worthless. This is how most people think of me.

Until EVERY person is seen as an equal human being, change will never happen.