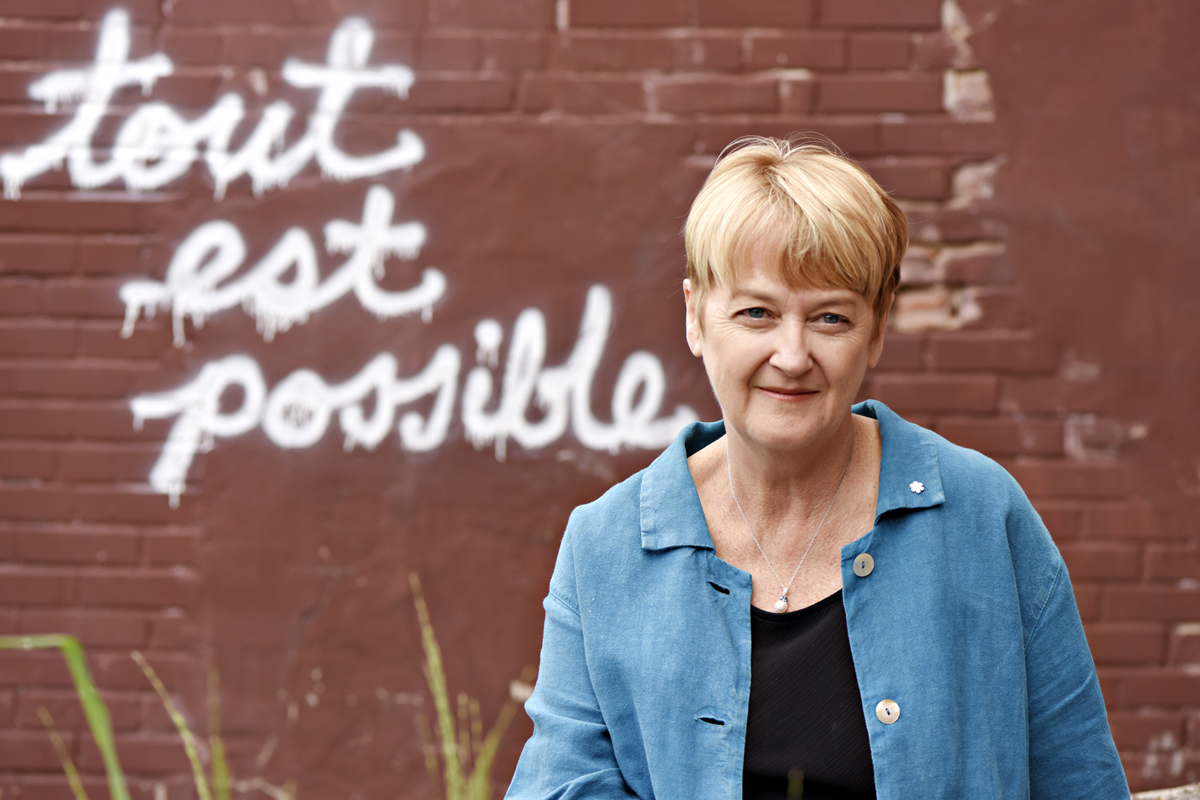 Crowe Fought for Physical Distancing in Toronto Shelters and Won

In super cities like Toronto, COVID-19 remains a scenario of disastrous proportions. The anxieties of citizens and health care providers are front and centre. The Greater Toronto Area is a hot bed for cases, even as surrounding areas are widening phase 3 of Ontario’s economic reopening.

Cathy Crowe is a Street Nurse, author, educator, and activist who has been on the front lines of homelessness advocacy in Canada’s largest city for over 30 years. She has faced down huge political obstacles as a focal point during some of the worst experiences haunting Canada’s homeless.

As advocates protested at Rosedale Valley, and fought against clearing encampments beneath the Gardiner’s Expressway, Crowe didn’t pretend that struggles were over for her city’s rough sleepers.

“I’ve been hearing about more tent encampments,” Crowe explained. “They’re popping up in places like Kingston, Moncton, and all over the country. In Toronto, we’re seeing more encampments grow. Some right on crowded main streets and right in populated shopping areas. The Rosedale Encampment was one in particular that we rallied around, because the City was planning to evict people there.”

An already busy time bucking the political establishment and fighting for those without a safe place to call home, COVID-19 brought further complications.

“When the pandemic started, Toronto passed a declaration against evicting encampments, which was fabulous!” Crowe recalled warmly. “It’s actually recommended by the United Nations, and also by the Centre for Disease Control out of Atlanta to not evict people in encampments. Under their logic, it becomes like seeds in the air. People lose their supports.”

While this development was a perceived win for rough sleepers across the large urban landscape, the optimism was short lived. Despite declared intentions, actions continued against “tent city” encampments.

“What you saw on television under the Gardiner Expressway was quite a brutal eviction of homeless people,” Crowe said. “The city is not keeping their word. A few people did get hotel rooms from that eviction, but not all.”

In a city with a diverse population, Band-Aid solutions only put dents in the larger health emergency of homelessness.

“We have over 70 shelters in Toronto, with over 7,000 people in them,” Crowe said. “It’s predicted that now our outside homeless population has gone from about 500 to about 1,500. It’s huge! We have over 50 encampments across the city.”

“One of the things that came out of the pandemic was the realization that the only way people could be protected was if they were in shelter settings where it was one person for one room and one bathroom. This can’t be done in most shelters. So, we began a campaign to move homeless people into hotel rooms. Over 1,000 homeless people have been moved into hotels.”

Hotels for homes campaigns are being echoed across the country. However, they are only meant as temporary solutions to shield homeless people from exposure to COVID-19. Crowe acknowledged successes in other cities, while also illustrating serious looming disasters.

“One thing I will say the city is doing well is that they’ve developed two hotels that are considered for recovery for homeless people after they have gotten COVID-19.”

Crowe broke down the dynamics of how these centres can prove helpful in addressing other symptoms of homelessness, as well.

“There is what we call ‘wrap-around care’ featuring on-site nursing and harm reduction support, peer support workers, doctors on call, three meals a day, one person per room, wifi access, and working televisions. All of this is available for a few weeks, or as long as the person needs to be there. That’s a model that’s exemplary. I have no criticisms of that. But I have other criticisms of both the province’s response and of the city’s response.”

Many of Crowe’s worries are reoccurring concerns elsewhere, which is people ending up back on the streets. When asked if there were any programs similar in scope offering much needed services, Crowe provided her analysis.

“I think the dream is there. We have 12 hotels now that support money is applied to under a lease arrangement. It would be optimal to purchase them, because then we’ve got opportunity for modest renovations. We could convert them into single-room occupancy (SRO) housing. But we haven’t bought any yet.”

As fall draws closer, the worries of a second wave of COVID-19 are top of mind.

“The goal would be some kind of pandemic exit strategy. Otherwise we’re putting people back into shelters. We have to rethink shelters. We see this discussed at some of the national conferences on homelessness. There is big dialogue about new shelter models. Similar to hospitals and long-term care, we have to start looking at one person per room, with a maximum of two for the sake of health and safety.”

Crowe admits that she doesn’t have the answers needed to tackle the issue fully, but her optimism has not yet been tempered. “We have to be aspirational, not oppositional. We got our first national housing program after World War 2. Maybe it’s time for a COVID housing program.”

News coming out of Toronto is not all bad.

Incredible victories are inspiring other communities to act. A recent court victory mandating physical distancing in shelters will have long-range impacts as this crisis continues.

“We had to go to the Superior Court of Ontario to convince the city to create physical distancing in shelters,” Crowe said. “That it means moving beds, cots and mats a minimum of six feet apart, and to stop using the top of bunk beds.”

Even in spite of this monumental victory, Crowe admits that having to face this down in court was disappointing.

“We tried the normal channels. We asked the Medical Officer of Health, we asked the city. Many people asked, and still they chose not to do that. They argued that (six feet social distancing) should be voluntary.”

“That left thousands of people at risk, so we created a court case. The Canadians Civil Liberties Association and a huge legal network worked hard on this, and the city settled. They are now doing their best to comply, making reports available to us so that we are able to monitor them.”

The case still remains in the courts, should it need to be reopened. And while the outcome has been favourable, the strain of a fractured relationship stings Crowe.

“Everyone has probably now memorized the mantras of ‘wash your hands, don’t touch your face and your eyes, stay six feet away,’ and all of these different ways of saying that. And we (the City of Toronto) wouldn’t do it for people in our shelters,” Crowe explained disappointingly. “People were sleeping in rooms of 40 to 100 people. It was unfortunate that this had to go to court.”

Crowe noted that the response to the decision has impacted shaping Toronto’s public health messaging.

“I think that on social media, people were celebrating with us. But they were also expressing their shock that the city wasn’t willing to work with us. The city actually cancelled their daily press conference after the result was announced. And we have begun receiving our initial monitoring reports, which allows us to pose more questions to them.”

While these recent developments are likely to be beneficial, for Crowe the tragedy of homeless deaths continues to propel her forward.

“I think many people were kind of on pins and needles waiting for that to happen. When COVID-19 homeless deaths began happening, we were still very shocked. We added the two men onto our Toronto homelessness memorial listing as Jon Doe’s,” Crowe highlighted mournfully. “One of the men was an elderly man in his 70s, and the other was in his 50s.”

Citing recent research, Crowe again expressed her worries. She referenced localized data that some area researchers are citing, predicting that “if enough measures are not taken quickly, there could be hundreds of deaths in the shelter system in a city the size of Toronto.”

“Right now, we are pushing for what is called ‘universal testing’ of everyone in the shelter system. But as you can imagine, there is a lot of finger pointing at this stage. Testing is the responsibility of the provincial government, but the municipality directs where testing takes place.”

“We have to fight for that! We can’t let governments tell us they’ve spent too much on COVID-19 relief. Keep fighting for important legislation like pharma care. We can’t let them tell us they can’t invest in housing. We have to stay on the front-burner.”

Correction: Cathy Crowe provided an update. Since this interview took place in May, her group has taken the city back to court. In addition, there have been a total of 630+ COVID-19 cases and 5 deaths within the homeless population and the real encampment number is closer to 24. 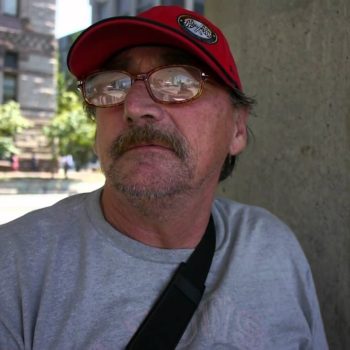