Steve lost his job in 2018. After being evicted, Steve tried to live in his car but ended up living in a tent homeless in Los Angeles’s Koreatown.  I first met Steve about a week ago when there was a large homeless sweep. He had moved all of his belongings to another street while police and sanitation cleaned the area. NIMBYs (not in my backyard) came out of a nearby apartment yelling at the homeless people trying to set up their tents, but they did not have anyplace else to go.

Homeless people have told me they welcome the cleaning. Still, homeless sweeps are poorly planned and displace homeless people causing trauma and making it harder for service providers to help people. The truth is, the city and country should allocate the resources they put into homeless sweeps to get people off the sidewalks into homes, but the entire system is broken.

Imagine once a week you have to pack up your apartment to move it across the street, then move it back. So often sweeps happen without posted notices, and belonging are destroyed or confiscated, including important documents, medications, and keepsakes like photos. 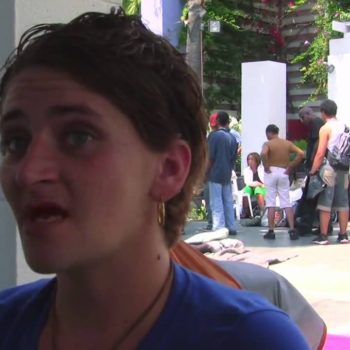