When I first met Joseph, he was hard at work filling up large plastic jugs with water. People gathered around a public water source just like the images you see of people in Africa gathered around a well. The big difference is this is happening right here in America.

Over 400 homeless people are living along the Santa Ana River in Anaheim, California. Orange County’s largest homeless camp is massive. Young people and old people and families and every type of person you can imagine are now living in makeshift tents doing whatever they can to survive.

Mohammed Aly, a lawyer, and homeless advocate told me that the main reason this homeless camp is growing is that in 33 of the 34 cities in Orange County homelessness has been criminalized. Homeless people have nowhere else to go but the Santa Ana River trail near Angel Stadium.

Just like in Third World Countries, people that stay in Joseph’s camp take turns making the daily trek to fill up jugs of water for drinking and cleaning! It’s almost inconceivable this is taking place in one of the wealthiest counties in the United States. Joseph was hurt really bad at work. He was on workers comp for many years. Joseph says he cannot qualify for SSI because he can still get around.

Joseph worked as a bank janitor while still living in the homeless camp. Joseph’s backpack was stolen along with his work keys, and he lost his job. Joseph says that not every homeless person does drugs yet the city treats everyone on the river bank as criminals. There literally is nowhere else for people to go!

After this interview, Joseph told me he goes once a week to the local church that gives everyone a bag of powdered milk, a box of instant mashed potatoes, two cans of vegetables and a pair of socks. 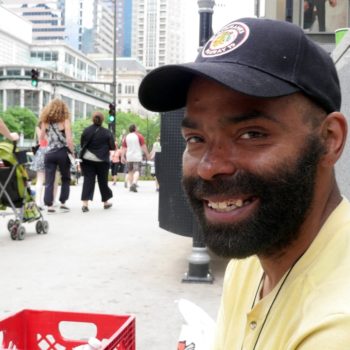 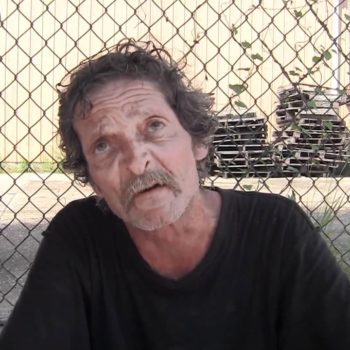