It’s about to get cold in New York City. When I asked Richard what he was going to do, he responded, “the same thing I do every year. I bundle up.” Sleeping outside in the winter is a sad reality for homeless people who cannot find or afford stable housing.

Richard has been sleeping in the same area for over a year and has been homeless for six years. Richard’s tried the NYC homeless shelter system. After two years of working with case managers, Richard was placed into a shared shelter situation, but with the roommate, he was partnered with, Richard felt sleeping outside was better. I hear this a lot about New York City, and from my own experience living in shelters, many are horrible places.

Richard was the caregiver to his wife. Unfortunately, when his wife died, he was evicted a few days after. It’s a familiar story that when a person dies, often the caregiver is left without the ability to cover housing costs and basic needs. For Richard, it was even worse, as the insurance company came after him for unpaid medical bills.

Richard says he gave up. He started doing drugs. Richard lost most of his teeth using methamphetamine. He no longer uses meth. Richard is trying to rebuild his life, but the homeless services system doesn’t make it easy for people to get the help they need.

Richard says he needs just two weeks of stability before returning to work, but the truth is that people who have been outside for long periods need time to heal. Besides that trauma that causes homelessness, being on the streets creates more trauma. The thinking someone can go from the sidewalk to employment is not realistic or practical. But people can heal. They can maintain employment. But they need time inside and support first. 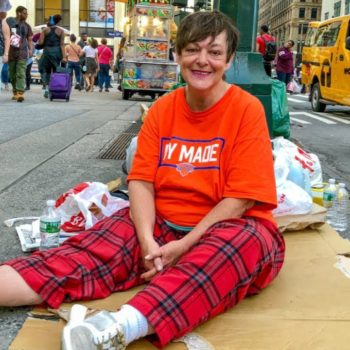