As I walked into a homeless camp in the San Fernando Valley of Los Angeles, Mark had kind of surprised and happy look as he said, “Hey, I know you. I watch your show.” Mark went on to thank me for Invisible People’s important work.

Today was the first time I was recognized at a homeless encampment, and I have to admit, I got a little emotional. The highest level of praise that means the most is what homeless people think of Invisible People. Homeless people are the true experts. I spend almost every waking hour working to help homeless people in some way. Their opinion means the world to me. Mark, when you read this – THANK YOU!

Mark lost his business in 2008 and shortly after that, he lost his home and everything else of value. Mark says he put everything into his business but a few contractors didn’t pay while the debts piled up. The business was forced into bankruptcy.

Mark was then out on the streets scared to death. There is no manual for homelessness. One day you have a safe place to sleep and the next you have no idea where you are going to find food and shelter. You’re homeless!

Mark worked for 42 years and now can’t get a job anywhere. Mark says he cannot get anyone that owns a company to even talk to him. Searching for employment is all automated and computerized. Mark tries but he never gets a call back for an interview. Mark says that’s how it’s been for the last 10 years and now he’s at an age where he cannot do the work anymore.

Mark says there are lots of places that promise help but only a few nonprofits that actually do provide help. Mark ran into Eric Montoya who heads outreach for LA Family Housing. Thanks to Eric’s continued dedication to helping our homeless neighbors and support from LA Family Housing, Mark now has a housing voucher. What that means is soon, he will no longer be homeless.

When they need money, Mark makes a cardboard sign and stands on the freeway exit asking people for money. Mark says it’s humbling and embarrassing but he doesn’t know what else to do.

When I asked Mark about the police taking his stuff, he responded, “they only took stuff that I really need”. Mark says he believes in the police but it’s as if they have a personal vendetta against homeless people. 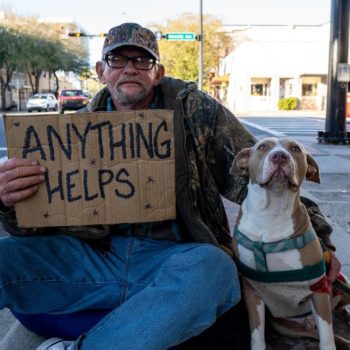