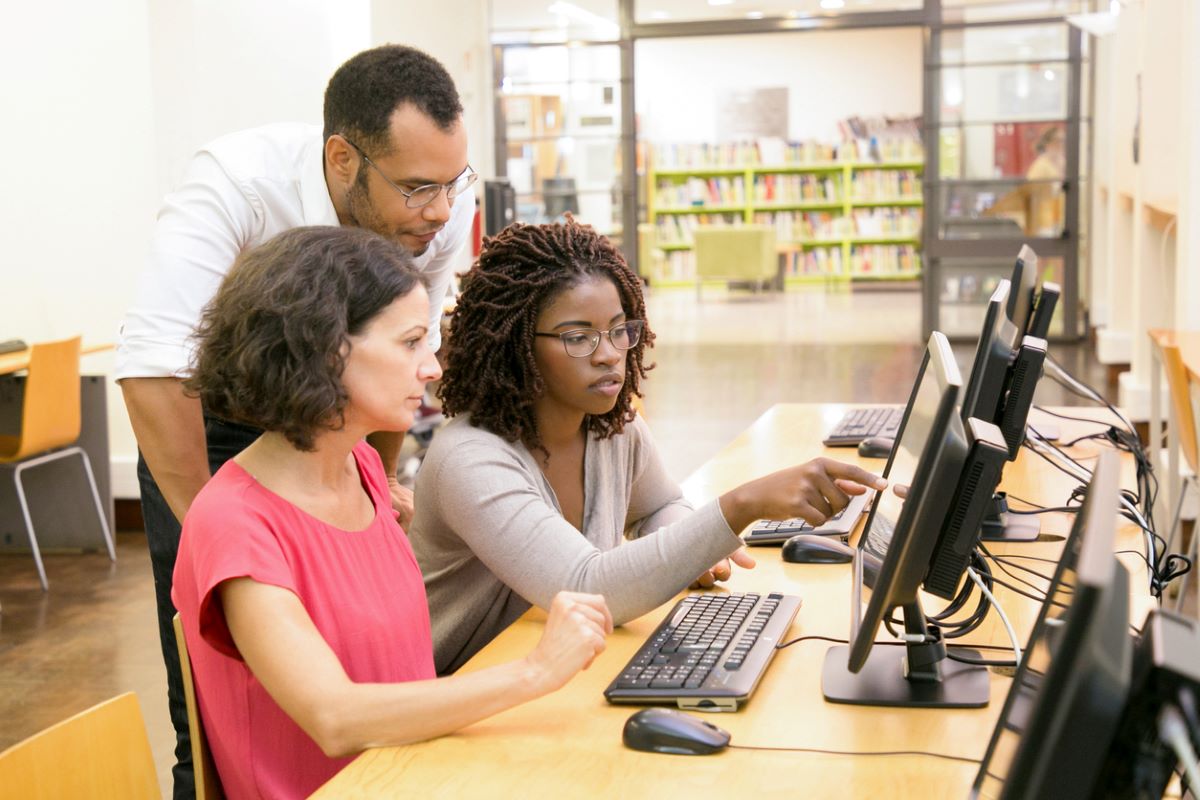 Libraries have long been a haven for homeless people. They provide invaluable tools and resources such as computers with internet access, restrooms, warmth and air conditioning, outlets for charging phones, and a safe, calm place to spend the day. Unlike everywhere else, libraries provide services with no expectation of payment. For a homeless person with nothing and nowhere to go, they’re literal lifesavers.

In addition to these features, libraries often have extra benefits for people in need. Some have embraced their unique ability to help homeless people by offering special outreach services. Social workers employed by libraries and working in-house with homeless patrons are becoming more common. If they can’t find a way to meet a need at the library directly, they find other resources. Problems they may help with include finding shelter for the night, refilling a prescription, or helping someone navigate the child welfare system.

Food banks provide free meals on the doorsteps outside, aiming to reach as many people as possible in a convenient place. The pandemic strengthened partnerships between libraries and food banks even more because library workers often helped at food banks when libraries closed.

One poignant example is the downtown branch of the Omaha Public Library. For nearly thirty years, meals were served to homeless people just outside its doors. The W. Dale Clark Library had a convenient location for its marginalized patrons; it was within easy walking distance of a large homeless shelter, was off a bus line, and was next to a subsidized housing building.

Unfortunately, the W. Dale Clark is being moved from its ideal location to a more gentrified, less accessible one so that a new corporate high rise can take its place. Gentrification and homelessness don’t mix well. As prettier and more expensive architecture arrives, so does an influx of NIMBYism. Loft and office tenants don’t want to see a line of homeless people down the block to receive a meal from a food bank outside their window. When disdain toward homeless people grows, the services they rely on get pushed out.

Decisions like these highlight the need to protect public libraries. Although libraries as institutions are probably not going away anytime soon, their accessibility to homeless people is under threat. We must recognize and value the broad scope of good that libraries provide our communities.

Is It Fair to Expect Libraries to Provide So Much Help?

Libraries shouldn’t be the only place homeless people can access the types of resources they offer. There should be more day shelters and spaces, including businesses that welcome people who cannot, or simply don’t want to, spend money. We should advocate for more of these spaces. However, we also need to invest in the resources we already have.

Libraries are government, tax-funded institutions. As such, they are responsible for serving all members of the public without regard for socioeconomic status. However, libraries were not originally designed to address all socioeconomic difficulties. Anything outside established library norms is determined by individual cities and can’t be made a universal expectation. So, although it’s great that San Francisco libraries have social workers on staff, and we can absolutely advocate for this, we should focus on ensuring community members have many opportunities to access social workers.

Many of the functions libraries serve could also be served by day shelters. People staying in overnight shelters are often asked to leave during the day, which presents a considerable challenge. Harsh temperatures, threats of violence, and routine criminalization of homelessness make everyday existence difficult or even dangerous for homeless people.

Also, in order to hopefully escape homelessness one day, people must have access to information. They need to contact social service agencies, social workers, fill out and submit forms, and apply for jobs.

There’s a lot of work that needs to be done, and without a computer and internet—or at least a charged phone—it simply can’t happen. Ideally, a day shelter could learn from libraries about the gaps in resources that exist and integrate them into their program.

Unfortunately, there aren’t many day shelters. Funds that could be used for day shelters can get used up by other needs that seem more important. For example, in the case of Omaha’s Siena Francis Shelter, plans for a new day shelter were changed to accommodate a new addiction treatment center instead. This was because a large percentage of the shelter’s patrons struggled with addiction, and treating the addiction became a clear path to decreasing homelessness.

How Can We Address These Gaps in Services?

Expansion of any kind to homeless services is a good thing. But when we must cancel plans for one needed resource to allow for another, it means there is a need for more funding so that both can eventually exist.

The demolition of a library in a place well-situated to serve Omaha’s neediest residents so that it can be placed instead among flashy new shopping centers is a sad thing. Although it may seem like decisions like these are out of our hands, they are made by people whom we elect. We can vote instead for people who will prioritize the needs of our homeless neighbors.

We can also stay up to date with what is happening locally among our homeless communities. The more we know, the better prepared we are to fight adverse developments. We can attend town hall meetings, spread news about elected leaders harming their constituents, and make our voices heard.