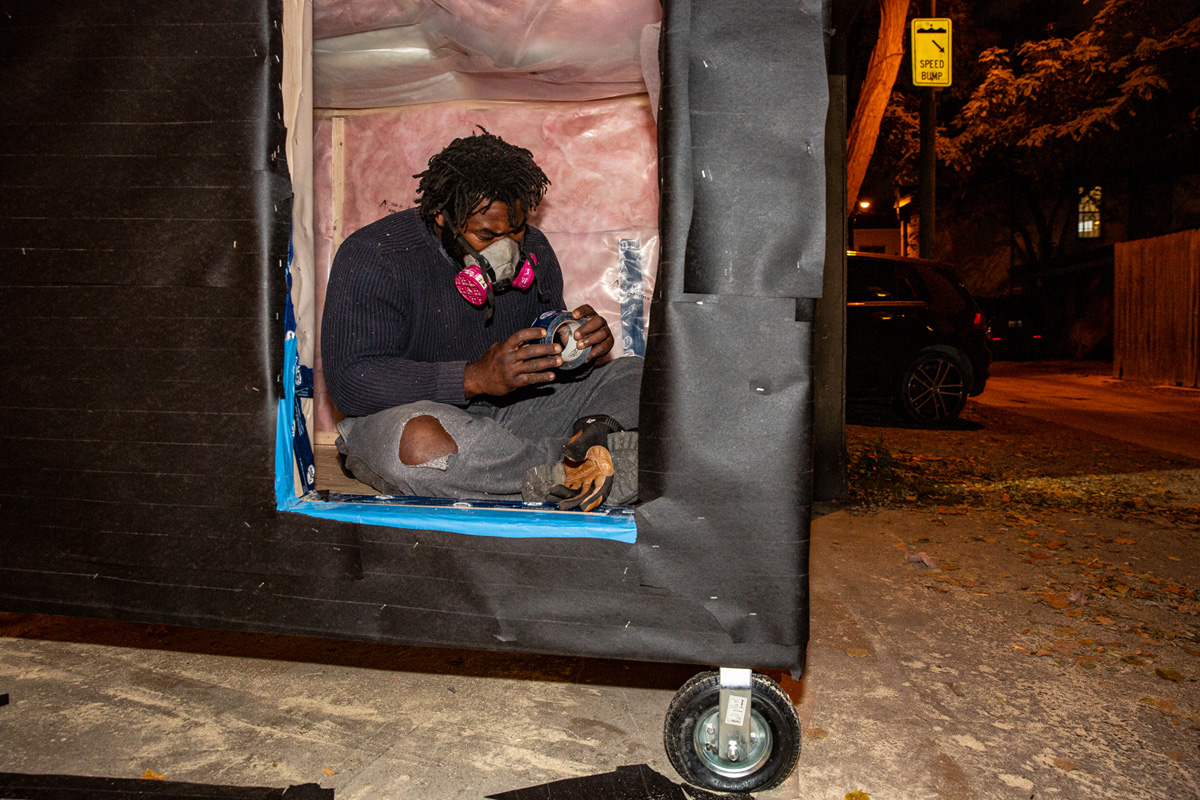 Khaleel Seivwright works with tuck tape as he nears completion of a tiny structure he and a volunteer are building out of an east end garage. Toronto, ON. November 3, 2020. Photo credit: Nick Kozak

A vast sea separates people who merely notice a need and those who do something about it. Toronto’s Khaleel Seivwright falls firmly in the second category. With his city bracing for a long, cold winter, Seivwright decided to do what he could to help Toronto’s vulnerable homeless community.

What exactly has Seivwright been doing? Leveraging his skills in the trades, the Scarborough native has been building tiny shelters for those without shelter.

The small wooden structures are lined with a thick layer of fibreglass insulation. They also feature a door, small window and spinning casters. Low on amenities but potentially lifesaving, Seivwright said building one only costs about $1,000 in materials and a solid day of labour. It’s a small price to pay to keep people warm. What’s even better is that Seivwright has been giving them away for free.

“These tiny shelters are designed to be mainly heated by body heat. And because of their size and the insulation value of the walls, ceiling and floor, just body heat alone should be enough to keep the shelter around 16 degrees Celsius (60 degrees Farenheit) in [temperatures as low as -20 C (-4 F)].”

Seivwright’s timing couldn’t be better. Experts predict that more people will be living outdoors this winter. And while Canada isn’t all curling and igloos, Toronto might as well be Antarctica for those without shelter. In 2017, 94 homeless people died in the city, with a large percentage of these deaths caused by cold weather exposure.

Contributing to this “perfect storm” is the fact that many Torontonians are running out of COVID-19 emergency benefits. Housing experts fear that those living in unstable, unaffordable housing are merely weeks or months away from facing eviction. With city shelters already bursting at the seams, it’s not hard to imagine what will happen next.

“It’s going to be catastrophic,” said Cathy Crowe, a well-known Toronto street nurse and activist who has spent decades on the frontlines of the city’s homeless scene. “People are trickling into homelessness now, but it’s going to be like nothing we’ve ever seen in our lifetime.”

Toronto’s shelter system is already being taxed. While there are plans to open hundreds of additional spaces—560 spaces, to be exact—over the next several weeks, affordable housing advocates fear that those beds won’t be enough when the “trickle” into homelessness turns into a wave.

Greg Cook, an outreach worker with Sanctuary Ministries Toronto, shares similar concerns about the city’s plan. “There are encampments everywhere and they’re growing—we think over 1,000 people are outside and this only has space for 560.”

There are also concerns about what the city is planning to do in one of the Canadian National Exhibition grounds. One hundred beds are slated to be set up in an enclosed space. While the city said that Plexiglas barriers will separate beds, Crowe said that this will only “give a false sense of security that [clients are] going to be safe from COVID-19.”

COVID-19 has already ravaged the city’s homeless population, with 650 cases and five deaths within the past few months. These pandemic-fueled fears have pushed one-time shelter users back onto the streets. Nearly 400 camps have popped up throughout the city since the pandemic began.

Enter Seivwright’s tiny shelters on wheels for easy mobility. In lieu of effective housing strategies, and in light of dropping temperatures, these pint-sized structures might be just the tonic needed to help the city’s neediest survive potentially fatal drops in temperature.

The mobile shelters aren’t without their critics, though. Seivwright remains determined, saying that the threat of bylaw enforcement against his tiny shelters won’t deter him from building and distributing them.

Seivwright is modest about his target:

“This isn’t a permanent solution. This is just making sure people don’t die in the cold this winter … at least some people.”

Building these rectangular structures is an exercise in thinking outside of the box. It’s a tangible band aid solution to a problem Torontonians feel has persisted far too long.

“This is what I know how to do, this is what seems viable. So, I’m going to continue to do this.”

Seivwright has set up a GoFundMe page. Judging by donations received, people are invested in doing something about it.